The Art of Isolated Thousands 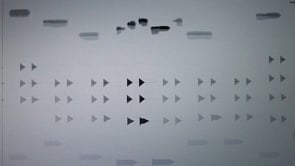 Information used to be scarce, held by the rich and powerful and carefully guarded. Now we have and overwhelming amount of the stuff and each leave huge trails of it wherever we go, online and offline. It is no wonder that Data Visualisation has become such a rich area for the blending of designers, artists, programmers and number fetishists. These days there are enormous datasets, often with open APIs to mine.

Aaron Koblin’s project, Flight Patterns gained a lot of attention for its beautiful, ghostly patterns of flights in and out of the USA built from FAA flight data as did his work on the Radiohead House of Cards “video”.

But what do you do when you want to create a large data set all of your own? I went back to Koblin’s site for a lecture I am writing and was thrilled to discover a whole set of new projects in which he has crowdsourced input from thousands of people using Amazon’s Mechanical Turk platform.

The above video is from A Bicycle Built for Two Thousand – a collaboration with Daniel Massey – in which over 2,000 people were asked to record themselves emulating a tiny snippet of audio sung by a computer from the famous song.

Like The Sheep Market it uses a custom drawing tool that records the drawing process, which is played back as you explore the images. It reminds me a of Andy Deck’s Glyphiti project, which has been around for some time now, except that in the all the Mechanical Turk instances, none of the participants had any idea of the end goal. This, for me, is where the magic lies.

There is something quite powerful about the idea of thousands of people creating a work of art in tiny, unrelated chunks, unaware of what they are contributing to. Quite apart from the end result, it provides an engaging commentary on our networked society both in terms of online connections and the global economy and sustainability.

And the sheep are hilarious.