Learning from Raiders of the Lost Ark

I’m in the research phase for a book project that looks at how and what designers and organisations—particularly those involved in service design or complex projects—can learn from filmmakers.

In the words of Michael Caine, not a lot of people know that I studied film as an undergraduate and carried on until my final year until I was fully sidetracked by interactive media. But the filmmaking process has always played a big role in the way I think about how multi-disciplinary groups of people can best work together creatively.

More on that in the future, but right now the area I am researching is storyboarding. I frequently teach groups of self-proclaimed non-drawers how to storyboard in workshops so that they can pitch their service propositions and ideas. Working visually with a sequence of images on sticky-notes on the wall is a much quicker and better way of walking through what a service experience might look and feel like than just using text. As you move your eyes across the touchpoint sketches, you build your own mini mental storyboard of the user/customer journey.

To combat the “I can’t draw” panic that many people have, I regularly use Pixar Story Artist Emma Coates’ great technique of drawing from films. You take a film, such as Raiders of the Lost Ark and freeze-frame every time the shot changes. Then you sketch a thumbnail of the shot as quickly as possible. I give my workshop participants about 10-20 seconds. 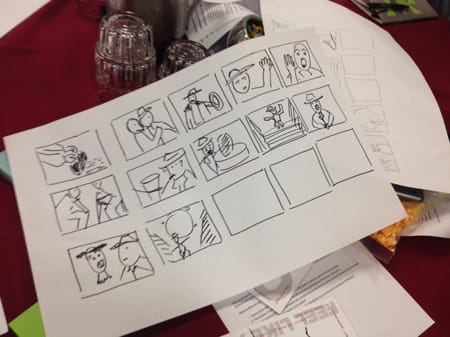 At that speed, everyone draws equally bad (or good, depending on your point of view). I have done this with mixed groups, often with illustrators in the mix, and the previous skill level has little to do with the final result. In fact, sometimes those trained to draw well have a problem letting go and drawing rough. The key skill is being able to see which elements are important and which are not. That’s a skill that is useful in many other contexts.

As it is for Emma, Raiders of the Lost Ark is a classic youth memory of mine and remains one of my favourite films in terms of structure and staging. Thanks to its heritage from melodramatic Sunday afternoon matinee movies, the staging and framing are really clear to sketch.

I want you to watch this movie and think only about staging, how the shots are built and laid out, what the rules of movement are, what the cutting patterns are. See if you can reproduce the thought process that resulted in these choices by asking yourself: why was each shot—whether short or long—held for that exact length of time and placed in that order? Sounds like fun, right? It actually is. To me. 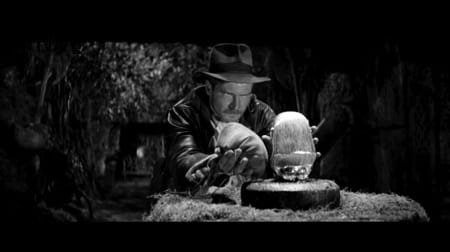 Cool, that Soderbergh posts about this, but even cooler is that he made a black and white version with the soundtrack stripped out of it for the exercise. It’s great, go take a look.

For some extra goodies, check out these:

Humans Aren't So Bad After All

I don’t normally do straight plugs for things that aren’t interactive and that I’ve never heard of, but this screening at Film Friends …