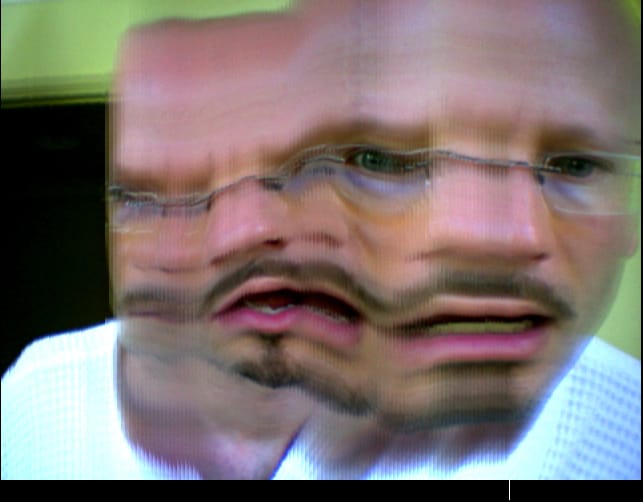 Along with the Flow paper I just posted I also showed a demo of my Time Smear piece, which uses a slitscan method that is rather popular in interactive circle right now (as I discovered after I began working on it). The full demo paper is available at the ACM website or again, contact me if you would like a full copy or to see the software.

The abstract is here:

My primary area of research is trying to develop, or at least contribute to, a language of interactivity. Central to this process is the notion that play and playfulness appear to be central features of interactivity along with the physicality of the interaction (even down to mouse movements).The Time Smear demo is part of a series of works that deal with live video and the slicing of time as interactive building blocks. The use of a camera as the interface effectively dissolves the interface and thus the interaction (and in this case the interactor) becomes the content, the experience and the “work” itself.The main ambition of the piece is not technical, but rather attempting to discover the minimum amount of “pre-authored” elements that cause the maximum interaction. In particular I am keen to induce people out of their normal “gallery visitor”, serious state and into a state of play for as long as possible.Time Smear works in a similar way to a scanner or photocopier. It takes a “slice” of time repeatedly across the screen width. The sample size can be altered as can the speed of the scan. In essence it freeze-frames many slices over time leaving a “smeared” image if there is movement in front of the camera. Crucially, the video feed is live before it is frozen in a slice so that the interactor can orchestrate their movements.The end results are, of course, reliant on the interactor’s movements but are often reminiscent of Francis Bacon’s paintings. This simple interaction usually manages to capture people’s attention and make them wave their arms in the air, move around strangely, and generally play with the possibilities of the piece. The longer they engage in this behavior the more successful I feel the work has been compared to the thirty seconds someone might spend in front of a Picasso at a national gallery.

'Birds' - the new clip from Pleix

The Flow Principle in Interactivity