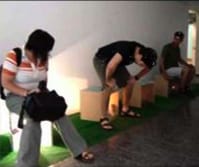 I have just read great paper called Adding Playful Interaction to Public Spaces by Amnon Dekel et al. from The Hebrew University Jerusalem and The Bezalel Academy of Art and Design, Jerusalem.

In it they describe three projects that involve physical interaction with fairly everyday objects, but that are all playful. My favourite two are probably the Musical Chairs that consists of a set of stools set up in a row. When sat upon the stool creates some audio-visual feedback, but the best part happens when someone sits on another stool as a kind of circuit is set up between them. When someone then sits in-between, the person on the end is cut out of the circuit - so of course people start playing musical chairs.

I thought this quote was a very good summary of the central principles of interactivity:

Our observations brought us to the realization that as long as the interactive vocabulary of such systems is simple enough to be understood quickly by viewers and participants, then they can be effective. This is a clear barrier – a system that is too complicated to understand within a 30 second window will go unused in most cases. We view effectiveness in this context as a situation in which casual participants, who do not have much time on their hands, will successfully negotiate and understand the interaction model of the object and thus enter into an enjoyable and playful session with it.

I’ll see if I can get some decent images and video from Amnon (perhaps he could upload to YouTube?). in the meantime, read the paper.

What's in a name?