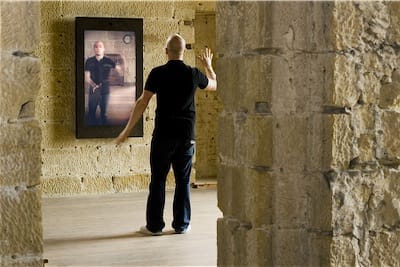 United Visual Artists have a lovely new piece called Hereafter, which is very similar to elements of my Time Sketches in that it layers frames from a video stream with minimal opacity so that it builds up over time.

They’ve done it much better than I did, though, not only because of the wonderful setting and the custom housing by Based Upon but because they use a high-speed camera to massively slow down your ‘ghost’ image. I can see it changes the style of the interaction and gets people moving around in space in interesting ways.

There is a basic element of interaction which is about seeing the results of your actions. This seems to always be the most fruitful with cameras - we’re all narcissistically fascinated by our own images of course. But there’s another aspect that I think Hereafter and Time Sketches (and plenty of others) plug into and that’s the idea of warping time. Slow motion and time-lapse cinematography are both fascinating and I think it’s because they’re on the fringes or outside of our normal senses of perception. X-Ray and infrared are also interesting in this respect, but there’s something about messing with time that seems to engage people, especially when it’s their own image.

Hereafter is part of the English Heritage Picture House exhibition. You can view more images and a video on UVA’s website.

(p.s. I did another Podcast with Matt Clark from UVA for Core77 that will be online soon. I’ll post a link when it’s up.)

This Happened, Once Again