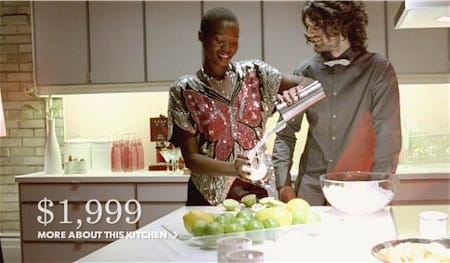 The multi-camera technique that freezes a moment in time, but allows you to pan around in space (popularised as bullet time in The Matrix, but it has quite a history) seems to be being used all over the place in Flash micro-sites now.

Now that Flash handles video and images so well, it’s interesting to see people try and use that ability in original, navigable ways rather than just putting a TVC on the web.

The folks over at Forsman & Bodenfors in Sweden have been going great guns with it on the IKEA Dream Kitchen site, which allows you to move around various styles of kitchen as they are frozen in a moment in time. They also did a Swedish version (that I think might be from 2006), which is simpler, but I like it better personally.

The same technique was used in the Halo 3 launch site by Method Studios.

(The picture above isn’t really a great example because it looks like an ordinary picture, so you have to imagine being able to move around the space - or you could just [look at the site](http://www.ikea.com/ms/en_US/rooms_ideas/ckl/default.html] yourself).)