ClickToy - A game for two year-olds 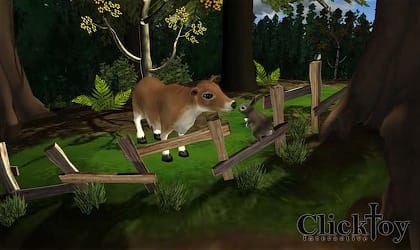 Old skool interaction designers will remember Grandma and Me

and the rest of Broderbund’s Living Books series. Those early ‘multimedia’ children’s books were some of the best examples of simple, playful interactivity. Anything on the screen that looked like it could be clicked did something - there was rarely a disappointment. Every tiny corner held a little interactive surprise and was surprisingly compelling. Some of those principles still influence the way I think about interactivity 15 years on.

Much of that approach has been lost in many current videogames, yet the truth is, many two year-olds play around on the computer and most of the stuff available is either a bit too gruesome or a bit too ‘edutainment’ focussed.

Clicktoy by long-time games developer, Ken Kavanagh, is a completely unstructured play environment. The first game, Meadow, is, well, a meadow. You can navigate around the space and press keys to make things happen. That’s it.

Kavanagh says that he was trying to think of something that his two year-old could use and enjoy and spent some time staring at the keyboard. Eventually he boiled it down to the idea that there are 101 buttons and thought, “What can I make happen if you make every button do something different?".

It’s a good approach to interaction design - look at what you have and think about what you can do with it, rather than dream up something grand and make a half-baked version of the dream. The open-ended play helps make the most of this approach.

"Children’s toys, like Fisher-Price toys, are super simple, they’re sandbox toys, open-ended play, no structure or goal, you just simply play with it,” says Kavanagh. “I wasn’t seeing that in software.”

The meadow, replete with bunny rabbits, deer, bumble bees, rainbows and flowers, was as innocent and as wholesome an environment as he could think of and also reflected his son’s existing soft toy collection.

Press a key and the bunnies hug each other, press another and an acorn falls from a tree and comically bounces of the deer’s head who looks around in surprise.

The lack of any story, which normally drives children’s games is also an interesting aspect, as anyone who has made up a story or watched a child make up a story can attest to.

"Since the game provides no narration I think it’s actually a wonderful opportunity to provide it as a parent. We can make up a story about the bunnies visiting their friends.”

It’ll be interesting to see whether this kind of thing gains ground. There’s no doubt that it’s unlikely that very young children are going to ignore the computer. Letting them play seems like a good idea to me. Taking them to a real meadow to see the living ‘characters’ is probably a good idea too. Like Disney without the associated McDonald’s merchandising.