Director 11 was released a couple of months ago apparently, though I hadn’t seen the press release. If this was a new version of Flash, the web would be going crazy right now, which just goes to show what’s happened to Director over the years. It was only Douglas Edric Stanley’s rant on how unstable it is that alerted me to the fact.

The good news is that Adobe have finally got around to releasing an Intel version of the Shockwave plug-in, so all that old stuff we made can be viewed online again, and Director is now Intel and Vista compatible.

The bad news is that it’s about three years too late. Macromedia and then Adobe pretty much let Director gather dust whilst they polished Flash. Though I’m sad to say it, there seems to be little point in Director anymore.

I’m sad because it could have been a contender in the multi-touch prototyping arena and because Macromedia and Adobe really just let a good application die. It’s also depressing because all that Lingo I know is pretty much redundant – I think I’ll learn Fortran next.

Director used to be (and probably still is) great for rapid prototyping, had a great set of plug-ins with its Xtras and its handling of bitmaps, video and audio was far superior to Flash. Now the likes of OpenFrameworks and Processing are there for funky stuff and Flash can handle pixels and video brilliantly for the day-to-day work.

I still think Director has a much, much better interface and conceptual paradigm than Flash, though the next version of Flash, ‘Diesel’, steals quite a few elements from Director to finally make keyframes usable. I also think that Lingo is a great way to get non-coders into programming because it’s very forgiving, although I know many ‘real’ coders find it too sloppy because of that. 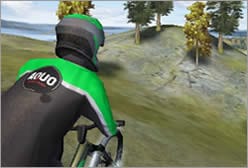 Adobe’s ‘Extreme Mountain Bike Race’ – about as extreme as a fluffy kitten.

Adobe appear to be staking Director’s future on 3D games online, but I can’t help thinking that in these days of online PS3 and XBox games – not to mention PC-based games – that the market isn’t huge for people wanting play 3D games that look and play like they’re from the Playstation 1. Simple 2D games like Line Rider are brilliant. If you want 3D, get a giant graphics card or a console.

Although there is talk of Director 12 and even 13, they’ll be too late to be of any use even if they do arrive. Director is effectively dead.

A great deal of the early discoveries and experiments with interactive media were created in Director (and Hypercard) and a lot of what we now take for granted online and offline wouldn’t have been the same without it.

So long, Director, been nice knowing you.

I know some of you out there reading this are of have been Director developers – I’ve even taught a few of you – what do you think?