Google isn't making us dumb, but 'smart' is changing 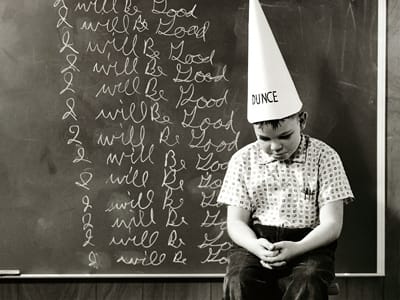 It started with Asi’s comments on Nicholas Carr’s Is Google Making Us Stupid? article. Forty-five minutes later I had Googled through laterally-related sites, read several blog posts – one or two both considered and long – listened to a lecture and found a book I hadn’t known about

but will probably read.

Has any of that made me dumber? No. Does it conform to what we have been taught to consider smart? Probably not. And there’s the problem. Carr is looking through the telescope from the wrong end. It’s not that Google is making us dumb, it’s just that what we used to think of as ‘smart’ probably wasn’t that smart after all.

The main thrust of Carr’s piece is that the web encourages us to skim and is re-wiring our brains so much that we’re unable to read and concentrate deeply anymore. Moreover, this fuelled by Google’s desire to earn click revenue from this kind of behaviour – this was the conspiracy theory aspect that Asi felt was a step too far, whilst he identified with the skimming behaviour.

Carr draws upon the work of developmental psychologist, Maryanne Wolf, to explain that, “Reading is not an instinctive skill for human beings. It’s not etched into our genes the way speech is.” Except that speech probably isn’t etched into our genes in that way. According to Steven Pinker and others, the form of language arises from the way with conceive of and perceive the world, not the other way around as Linguistic Determinism would have us believe.

Carr quotes a study from University College London that examined how users use a database of journal articles, e-books and other written material:

“Sometimes they’d save a long article, but there’s no evidence that they ever went back and actually read it.”

(Carr doesn’t provide a reference, by the way, but you can find a PDF of the report from the British Library and download the full study from UCL).

Underlying all of this is the notion that deep reading of long passages is inherently ‘smarter’ reading than skimming, browsing, clicking and hopping. This goes hand in hand with the idea that retaining information makes us smart. It’s no wonder – the way we are educated places great emphasis on the ability to regurgitate information in exams, but that, as many educators know, tends to encourage surface as opposed to deep learning.

Very crudely, surface learning is about learning facts and ideas uncritically and deep learning is about tying ideas and concepts together and making links between them. Which one of those sounds more like reading online? (In case it’s not obvious to you ‘dumb’ people out there - I’m suggesting it’s the latter.)

As Asi points out, del.icio.us is a kind of repository of stuff that I may never go and read again, as is the “To Read” folder permanently on my desktop. But these are like über notes - rather than my scrawled lines, I have a link to the original material, some of which makes it into my own personal databases.

As is often the case with notes, I’m not writing it down to remember it later, I’m writing it down to remember it now. The act of saving the article or posting it to del.icio.us helps me remember that it exists at all. Not only that, but it helps me find other links to material I never knew about, which is largely Steven Johnson’s point about serendipitous learning (the ultimate in serendipity has to be StumbleUpon).

Bear in mind that the study Carr quotes was in partnership with the British Library and that studies often ‘find’ what you are looking for in the first place. This part of the report that looks at the truth in the ‘Google Generation’ myths stuck out for me:

They prefer quick information in the form of easily digested chunks, rather than full text

Our verdict: This is a myth. CIBER deep log studies show that, from undergraduates to professors, people exhibit a strong tendency towards shallow, horizontal, `?icking’ behaviour in digital libraries. Power browsing and viewing appear to be the norm for all. The popularity of abstracts among older researchers rather gives the game away. Society is dumbing down.

Hang on. It’s quite a leap to say that ‘power browsing’ means society is dumbing down. Do they really mean that all those students, postgraduates and professors are dumber? It’s not easy to get a professorship or a postgraduate degree (which tend to be the most research intensive). My experience and impression is that it is often much harder than it used to be.

Could it not be that the ‘older researchers’ research differently because that’s simply what they are used to? Or maybe they haven’t ‘smarted up’ yet. The study notes this ‘pre-digital’ memory as being a factor in the different styles.

I think people use Google not just because it’s easier, but it fits the way with think better than most research library databases, which tend to have dreadful interfaces and force researchers to think like a database programmer, not like a person.

The ‘smart’ that the study defines is really about knowing the foibles of these systems; it’s got little to do with actual learning. The study notes this: “young people do not ?nd library-sponsored resources intuitive and therefore prefer to use Google or Yahoo instead”.

Ironically, given Carr’s reading of Google through the lens of Frederick Winslow Taylor’s industrial efficiency, it is precisely this Industrial Revolution style of thinking that we’re moving away from. Pat Kane argues the point in The Play Ethic:

“[F]or the culture of industrialism, in which an individual’s submission to routine is what is most valued, a network society is something of a disaster. The industrial mindset is too brittle to cope with the way that networks operate.”

What we are seeing in the transformation of media, advertising and marketing, learning and teaching, and culture in general is that the way we used to measure the value of any of those things no longer works the way it used to. It’s not that those things suddenly have less value or are dumbed down, but that we’re not measuring them fairly or correctly. (For a brilliant treatise on this, see Steven Johnson’s Everything Bad Is Good For You.)

Reading a book is a different experience than surfing the web, but you’re in dangerous and murky Andrew Keen territory to make the qualitative judgements Carr comes up with, as Asi notes. Reading a long, linear book is no guarantee that it’s automatically a deeper, more learned experience. (Have these people ever read John Grisham?).

So, I’ve just spent nearly two hours putting together this post - reading lots of material and becoming aware of a great deal more that I’ll look up when I need it, just as Einstein did. I’m reasonably sure he wasn’t that dumb. Am I?

Give my balloon a boost