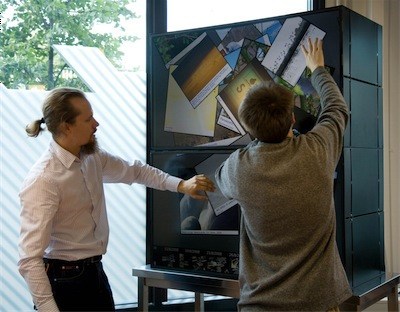 MultiTouch have just launched the “world’s first modular multi-touch LCD screen that can be used to create large tables and wall screens.” They are LCD screens with multitouch capabilities built-in and can be stacked and configured into many different formats. So far they have built a 6m long wall, but theoretically it be as long as you like providing you have enough machines to power them.

The Cells are also very robust in terms of environment - they can work in bright light (as well as the dark of course) and tracks both fingers and hands for some more complex gestural interaction.

The system also uses their Cornerstone SDK, which should be launched soon which anyone should be use also outside of the Cells.

I would imagine we’ll be seeing quite a few of these around all sorts of public spaces soon. Take a look at the high quality video of it in action. No word on pricing yet though.

(Thanks to John from 3Eyes who has been working on it for the info.)