Jonathan Harris at Flash on the Beach 08 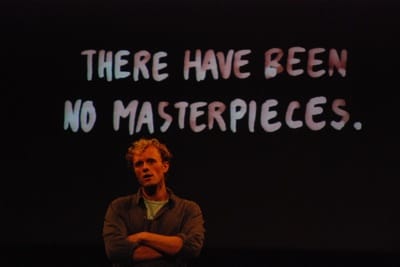 Jonathan Harris’s talk at Flash on the Beach caused quite a stir this year. Originally titled The Art of Surveillance and Self-Exposure, he altered the last section to Beyond Flash (slides here) arguing that “there have been no masterpieces” in Flash (and he included his own work here).

I recorded the session, which you can listen to below to decide for yourself. (Due to a human error, the first couple of minutes are missing):

He also suggested that the Flash community has become too absorbed in technical tinkering at the cost of ideas, and that’s probably the part that angered most people, so much so that he decided to write a response.

Whilst some attendees took a lot away from the talk, several prominent people in the Flash community such as Peter Elst, Keith Peters and Erik Natzke took exception to either the message or the delivery with many accusing Harris of arrogance.

I’m not convinced by many of those responses.

I’ve known Jonathan and his work for some time and interviewed or written about him quite often. I’m preparing a profile on him for Creative Review right now, so I got the chance to catch up with him directly after his talk. I find him far from arrogant, rather he is quiet and thoughtful about both life and his work.

Calling someone arrogant is the easiest way to avoid any truth in what they have to say and dismiss the value of it and them. Another tack was to dismiss him as “some artist” with his head in the clouds and no idea of commercial realities, but Harris has done his fair share of commercial work and until recently was Design Director at daylife.

The Flash community is often unaware of much of the history of interactive media. Over the years I’ve seen many, many re-inventions of the wheel. Some of it is about seeing whether a prior work or technique is now possible in Flash, but a lot of it claims to be “new” when it isn’t, even some of the most celebrated pieces.

The truth is, there hasn’t been anything much that has been a paradigm shift coming out of the Flash world for a long time. Carlos Ulloa’s Papervision3D and André Michelle’s Audiotool are both technically brilliant, but what is impressive is that is was possible to create in Flash, not that they are a paradigm shift from Sega Rally or Reason. There are plenty of other examples too.

The question should be, what does making any of this in Flash bring that no other format could bring to the project? It could be file size, it could be openness or the fact that it is free (which is probably the biggest aspect of Audiotool, for example).

But something like Harris’s We Feel Fine could not have been made in any other age - it is a result of the blogosphere and interactivity combined. It could have been made in Flash, Director, Processing, C++ or several other languages.

And that’s the point - the tools are irrelevant if the idea is good enough. When Harris said, “Tools are not the idea. Tools are tools.” he’s absolutely right, which might be hard for some people to hear who are focussed on the tool alone.

Last one in the water buys the drinks