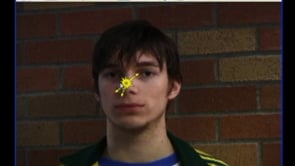 I have noticed I have been posting a lot of videos recently – I’m not sure if that’s me being lazy or that some things are simply a lot easier to explain when you see them in action (or interact with them).

One interface area that has not really changed a great deal over the years is in video editing and compositing. The two choices are timeline (such as you see in Final Cut, After Effects, etc.) or the kind of patch module used in Shake and other compositing tools. Both of these borrow heavily from their analogue roots (A-Roll/B-Roll film and video editing and optical printers).

If you have ever had to motion track a piece of video in order to glue a layer to a moving object in the video, you’ll know it’s pretty time consuming, even with the best of tools. This demonstration by Dan B Goldman from Adobe Systems shows how much easier this could be with a much more direct interface. I expect we can hope for it to be integrated into Adobe products at some point.

If you want to get technical, you can a PDF of Dan’s research paper is available on his site.