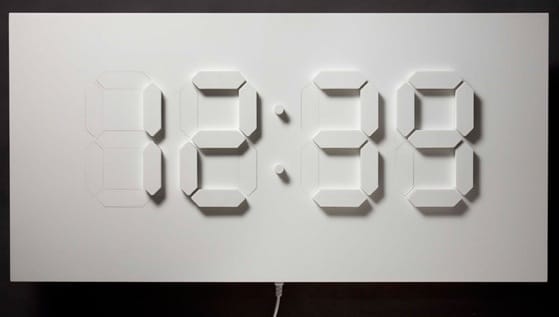 I like this digital analog clock from Alvin Aronson. Each segment slowly pushes forward or recedes back as the minute changes, which creates a analog in-between that you normally see on non-quartz clocks with a sweeping second hand. The white on white is a nice touch, adding to the blending into nothing effect.

Most digital clocks I have seen seem to follow the same, utterly boring lines as each other, based around the cheap standard components from Chinese factories. This is an elegant update to an old approach and it has a hint of playfulness to it too.

There’s a (tiny) video of it in action too.