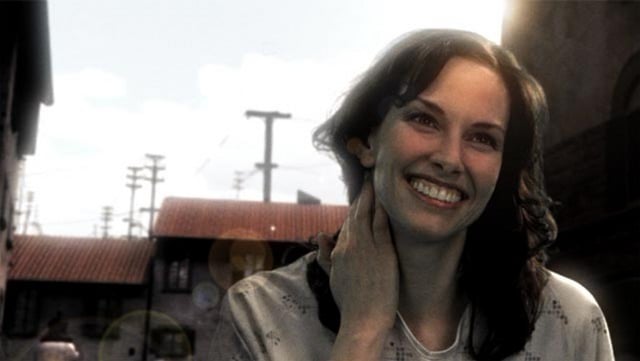 The Holodeck remains a fantasy for Trekkies and we’re still not yet jacked into The Matrix (or are we? Oooh.). Guys going to enormous lengths to build stuff for their girlfriends, on the other hand, has long been part of the human condition.

World Builder by Bruce Branit is about a guy who builds a holographic world for the woman he loves. There’s a reason it is holographic, which you find out when you get to the ending, so I won’t spoil it here. The film was shot in a day, but then took two years of post-production to finish off. Who says computers make things quicker?

The main reason for blogging it is because of some of the gestural interface elements in it. The overlay buttons and keypads are the usual fare and I remain unconvinced that jabbing at a floating holographic keypad button would be a useful UI approach, although it always looks good on screen. There are also some controls like spreading the fingers to enlarge and object and using the fingertips to rotate a virtual control knob that are already in use in gestural interfaces.

I’m not sure I have seen the idea of being able to pick up things like colours and textures on your fingertips and apply them to objects yet though in an existing multitouch interface. A few desktop applications use that kind of sticky mouse idea and 3D and 2D applications kind of use it with tools and colour/texture chips, but I still haven’t seen it all that smoothly done. Adobe seem to screw this up further and further with every release rather than making it easier. (Does CS really stand for ‘crappy shit’ rather than ‘creative suite’?)

The main issue with a gestural or multitouch interface would be keeping track of the identity of a particular finger tip once it has left the touch panel, it seems to me. But maybe someone has already solved this and it is in use – let me know if you know more.

(Thanks to one of my ex-students, Nico Marzian for mailing me the link).

Beyond the Fold, Print Lives On.

A Fax is too complicated GoDaddy