Does Graphic Design Have Superpowers? 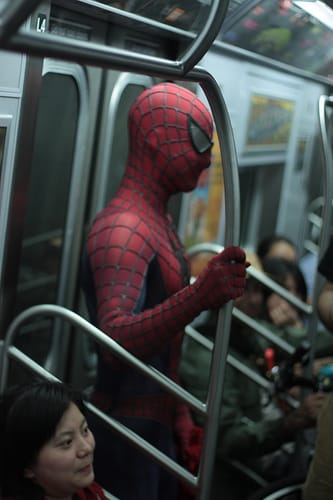 Rich Smith, a graphic design student in the UK wrote to me about the presentation I gave at AGDA’s Design A Better World event. He asked me what thoughts I had about the title of his thesis, “The Superpowers of Graphic Design” and the impact it can have on little things that might create big changes. It’s quite a question – here was my long answer:

Your subject is a big issue at the moment and it’s not easily answered. A while ago I talked with Stefan Sagmeister about this and his view was that it’s irrelevant whether or not we are designers, simply that we all have a duty to the our fellow man and the planet as human beings. I put some of it an essay I wrote with my colleague, Rick Bennett, when we set up something called the Omnium Creative Network (now morphed into the Omnium Outreach Projects. It’s called What the World Needs Now and there is also an interview with Paul Nini for the same project, talking about ethical issues.

I think the power of graphic design is paradoxically both overrated and underrated. It’s overrated because it’s pretty superficial most of the time and many designers execute their designs pretty superficially too. There are manifold reasons for this – from lousy clients, bad pay and unrealistic deadlines to laziness and lack of care. But the digital revolution has a big part to play. It’s so easy to turn out a huge body of work and have it printed or otherwise exposed to the world. It’s easy to make many variations without much thought. When it took a great deal of effort to manually draw a new version of a design, the slowness gave you time to think (something that Tomato’s John Warwicker once said to me was how much he liked it when computers were slow – the progress bar gave him time to think). It also made you consider your decisions much more because there were real penalties to changing your mind later down the line.

I’m not saying computers are a bad thing – I’m originally an interaction designer and generally a ‘digital guy’ – but I do recognise the impact they have on designers’ processes. Although it seems like computers have been around for ages and that so much has changed in the last 20 years, they’re really pretty new in the much longer context of design as an activity. I don’t think designers have become mature in their relationship to the computer yet. I think there’s at least one more generation to go before that happens – when the designers in their 60s and 70s are the grand old men and the equivalents of Milton Glaser and are the ones that have used computers all their lives, then I think they’ll have something interesting to say. We’re not there yet.

So, graphic design is, in one sense, totally superficial and has little power, not to mention superpower. In fact it regularly contributes to a lot of problems due to its rather slavish relationship to advertising and marketing. But that’s the paradox. If graphic design’s little sins (branding on everything, glossing over the truth of a product, using sexualised imagery to sell, greenwashing products, etc., etc.) are such contributors to the problems of the world, then that also means it has significant power. You can cause problems without having some kind of influence. But it’s as much power as, say, leaving your hall light on all night. Many of the small things are the things that got us into the environmental mess we’re in because they’re easy to ignore and because they don’t seem to matter.

But they do matter when you add them all up. All those seductive images of bottled water that make you feel healthy and pure and fit when you buy it and drink it – all lies, all terrible for the environment as a result, all seemingly trivial. So the paradox is that it is exactly graphic design’s triviality (and, by extension, it’s role in advertising and consumerism) that gives it its power, albeit a negative one. The fact that people don’t think about whether a picture of some clouds or a Scottish spring on a bottle of water really masks an industrial scale process that uses masses of petrochemicals in its bottles is both a feat of design genius and pretty insidious.

Designer’s give up that personal power because they tend to, like the consumers themselves, either not think it’s a big deal or consider what they’re doing as trivial. Sometimes they get wrapped up in the creative process and serving a client and forget to consider those aspects. Lastly, graphic design has constantly been kept low down in the production foodchain – you get given the brief after all the important decisions have been made. So, it’s easy to decide it’s not your role and that putting food on the family’s table is more important.

Yet there is still power there in that last stage of the design chain because it’s where the rubber meets the road, as Nancy Bernard says in Citizen Designer (a book I recommend, by the way, and most of it is on Google Books). The point being that graphic design is often the first point of contact anyone has with a product or service. So designers might be the last in the production process, but they play a vital role in nudging behaviour. People buy this brand instead of that brand based on pretty superficial aesthetic reasons most of the time. Many people deny this, especially those with science or engineering backgrounds who pride themselves on rigorous rationality. I don’t believe them. The best example is to think of when you last bought a bottle of wine based on what the label looked like – I’d be willing to bet it was pretty recently and happens quite often.

Nudging behaviour is, of course, the way to make or encourage people to make small changes that seem trivial and that’s what’s so important and where the power can be used. (There’s even a whole book about nudges too). A huge poster or web campaign about saving the rainforests or stopping glaciers melting is just too big. What can I do? I can’t stop a glacier melting, so why should I bother or pay attention? A piece of label design that tells me something encouraging and honest about, well, let’s say a bottle of wine, might make me change to that brand. It’s a small decision, costs me very little money or intellectual energy and it’s precisely because it’s seems trivial and irrelevant that I will so easily change my behaviour. My feeling is that graphic designers should pay attention to the details with the big picture in mind. Fight the small battles in order to win the war. And designers are good on details.

Of course there are a whole load of other areas where designers can make a difference to behaviour, but I think these move into interaction and interface design, service and experience design, product design and many other areas. Things like smart meters can and could have a big impact on energy usage in the home and office – some the biggest contributors to man-made CO2 output. It makes no sense to have a gas or electricity meter in the cellar, tucked out of the way and counting up in units that the consumer can make no sense of. It makes much more sense to have a meter telling you how much money you are spending on electricity at the moment or visually display your energy consumption in an informative way. That’s where designers can play a role by helping make sense of complexity and presenting it in ways that users can make informed decisions about and change their behaviour accordingly. Switching off appliances isn’t taxing, but making people care about doing it is.

All this also requires understanding the history and context of a service such as electricity provision, how it has been installed and ‘curated’ by energy companies and, of course, why they have a vested interest in you not knowing how much you are using until you get the bill at the end of the month or, like here in Germany, at the end of year when it is a total shocker. That involves design thinking – service design thinking I would argue – at a more complex level than graphic designers usually get the chance to do in many of the projects they are brought in on.

Sometimes superpowers aren’t necessary. Being the drop of water than cracks the stone can work just as well and, best of all, some people don’t even notice how much power you wield and won’t try and take it away from you as a result.

Is Design Research Useless for Innovation?