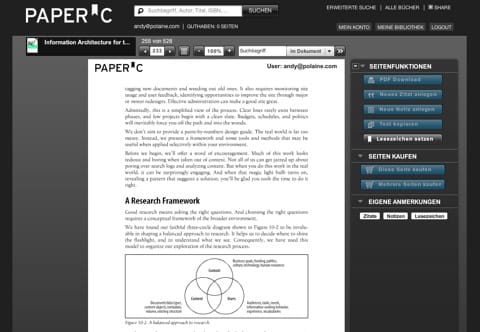 A recently launched service in Germany called PaperC (Twitter: @Paper_c) looks like it might become a pretty handy resource for students and researchers. It is an online library of commonly used textbooks for studying. You can read all of them online for free, but you can also download PDFs, make notes and bookmarks, and copy and paste quotes. The latter functions cost something, but not much. A PDF of 10 pages costs 1 Euro. The idea is not that it replaces books, as such, but replaces the photocopier. So far they have 2,799 books in their library.

Here is some info about the founders and their rationale behind it (my translation to English). It’s a good example of a service developed out of personal observation and frustration:

The founders of PaperC are Felix Hofmann, Martin Fröhlich and Lukas Rieder. The idea for PaperC came into being as Felix was commuting between Berlin and St. Gallen while writing his final thesis and having to schlepp many textbooks from the library around the place. At that time, there was no comfortable, online library. So we developed PaperC as an online platform for textboks. What was important to us was that one could read the complete book online, not just an excerpt. Our vision is to make knowledge freely available and at the same time allow authors and publishers to the possibility to offer their content online and earn money from it.

They have done a pretty good job of the service design of it (although I think the pricing should be more obvious) and it’s the book equivalent of being able to buy individual MP3s instead of an entire album.

What is interesting for me is that it’s really a service that universities should have already built themselves. [Update: The PaperC guys point out that it was built as part of a research project at St. Gallen’s Institut für Medien und Kommunikationsmanagement with Bozena Izabela Mierzejewska. Good for them for doing this, but I still think the point below is valid.]

The question is why they haven’t. My guess is that it is an example of how most library IT systems – and IT departments in general – tend to make little effort to understand what people need and what their daily tasks and frustrations are. Many of the existing IT solutions in universities (not just HSLU, but around the world) are purchased in one of two scenarios: an IT company selling a solution to someone who has no idea about the technology and is dazzled by the features, or an IT company selling a solution to an IT department, who are dazzled by the features (and, perhaps, the ease of implementation/security). Niether scenario includes the end users in the requirements gathering for such a system. This creates opportunities for services like PaperC.

Why should universities take note? Because it is a service that, had they developed it themselves, would have made much greater use of their limited resources. Libraries have limited space for multiple copies of books and books that are in great demand often aren’t available. When they are, they are often in poor condition with many notes written in them (if that’s you - stop it!). A service like this solves that problem and saves money – they need less copies of books and they don’t need to replace damaged ones.

Additionally, the library also has to maintain photocopying facilities that students pay for with their copy cards. This is conjecture, but I suspect the copy machines in most university libraries are under a leasing and service contract and that a large amount (if not all) of the copy card money goes to the leasing/servicing company and not the library. If the uni had developed the service such as PaperC themselves, the money would go towards improving the system, buying new titles and expanding the library offering. Of course there are the initial development costs, but it’s not hard to imagine that funded by a research project. [Update: Ditto the previous update]

There’s usually a downside to a service that replaces another. In this case it is that you have to print out your own copies instead of using a copy machine, which means, potentially, you have to pay twice (once for the PDF and again to print it out - either at uni or at home). But you don’t have to print them out because you can always read the PDF on screen. I’m tempted to say that is more environmentally friendly, but the power consumption and resources in your laptop probably offset not printing out copies. The real payoff is having a library of texts both stored in your online PaperC account and/or on your computer at home and not having to haul a bag of books around the place. Of course, a potential weak spot in the system is that ’enterprising’ students share the cost of a PDF and pass it around. The PDFs have no DRM as far as I am aware, but they do have your email address stamped across the top.

Does anyone know of an equivalent English language service, especially one offered by universities?