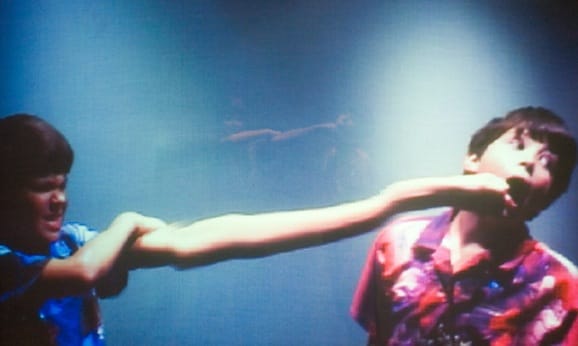 Some months ago I officially became Dr. Polaine (Andy Polaine, PhD. for you Americans) and have been planning to write a series of posts about the main themes of my thesis, Developing A Language Of Interactivity Through The Theory Of Play, for some time.

So to coincide with a post over at Core77 about the journey of doing a design PhD, this is the first installment to introduce the main themes and to provide a link to download the entire thesis (5.9MB).

The background to doing the PhD was largely everything I had learned since the early Antirom days when we were trying to discover and uncover the essence of interactive media and really trying to understand what makes it different from other media. At the same time I was getting more and more interested in storytelling and was fascinated by fact that great stories, regardless of their content and style, tended to adhere to clearly defined structures that had been honed over thousands of years.

They sound trivial, but turned out to be very difficult to answer in a rigorous way. The easy answer is, like love and pornography, “I know it when I see it,” but that doesn’t really help anyone develop a strategy to analyse or create new interactive works. New Media (to use an uncomfortable term) has had its fair share of academic attention, but most of it I have found pretty tedious and often distanced from my own experience of creating and using interactive media. So at the one end we have the media and cultural theorists and at the other we have the HCI folk. In the middle somewhere are the media art aficionados.

At Antirom we were playing with the affordances of the tools, playing with our understanding of narrative structure, playing games and, most importantly, playing at making interactive ‘things’. We were not terribly sure what one should call these ‘things’ that we were making. Sometimes it was tempting to refer to the medium itself, such as CD-ROMs, but this only described the storage format, not the interactive experiences. Partly because many of these interactive experiments were incomplete and partly because we felt they were experiments in play in both their creation and usage, we settled on calling them ‘toys’ for the most part. Sometimes we would take the code guts of one ‘toy’ and re-use or re-combine it with another and these guts we would call an ‘engine’.

Thus, within the same breath, we would use both non-industrial and industrial terminology for the same ‘thing’. It soon became clear to us that the “interactives” (as we now describe them) we were making a marked departure from the media forms that had gone before and that a language to describe them, think about them and create them also had to be invented. The media theory we had imbibed as students, that helped us deconstruct the complex layers of semiotics in traditional media, was rendered weak and impotent.

I couldn’t use HCI or common user-experience frameworks to examine an interactive artwork and at the same time I couldn’t view a commercial website or application design with a media arts lens. Yet I felt I could understand an interactive artwork with the same sensibility as a might analyse a piece of iPhone UI design, but there wasn’t a framework for me to articulate that understanding.

This is what became the subject of my PhD, which explores a still-developing discipline and thus borrows from a wide range of existing, established and not-so-established disciplines. Art and media historians and theorists may feel it does not draw upon enough cultural theory, nor does it draw on the often opaque language of those disciplines. HCI proponents will want more empirical and technical data. Behavioural psychologists may also have wished for more direct experimental data and linguists a deeper examination of the semiotics, semantics and syntax of interactivity.

The key to the whole exploration is play. Understanding how play and playfulness work, what constitutes play (still undefinable) and how much everyone like to engage in play when given the chance, is central to the thesis. But along the way it was necessary to draw upon a wide range of disciplines – from design, art, cognitive science, linguistics and more.

I argue that play is such a fundamental building block of culture, society, technology and cognition that it is the ideal lens through which to examine the interactive experience. It is versatile enough to cross boundaries and fundamental enough to be understood intuitively. Through an understanding of the intersection between movement, embodied cognition, metaphor and play, a set of principles of interactivity are developed that are flexible enough to analyse and be applied to a broad spectrum of interactive experiences, from interactive artworks to services to individual user interface elements.

The four main principles are a deconstruction of the interactive experience, which might last a second or several days. You can squash or stretch the timescale, but I have found the principles to hold true regardless of the context. I’ll post more detail on each one in coming weeks, but here they are for now:

Writing a thesis like this is like painting a large bridge – once you get to the end, you have to start all over again. Naturally, in the six years it took me to write the thesis (part-time!), technology and culture moved on rapidly. The iPod was in its second generation when I started and the iPad was just about to be released when I finished. The latter was important because it confirmed my thoughts on “the disappearing interface” and the need for a deep understanding of metaphor when examining interactivity.

Social networks also exploded onto the scene as I was writing my PhD. The final section of the thesis is somewhat of a postscript and proposes that these principles provide a way to examine the phenomenal growth of social networks and the fundamental cultural shifts we are experiencing today as a result of the friction generated between emerging networked technologies and the industrial age structures they are dismantling.

In future posts I’ll go into more detail on the various sections, but in the meantime I’d welcome your feedback via the comments or Twitter.