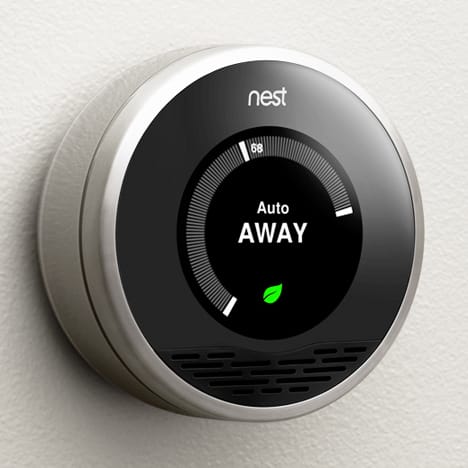 For those of you who have not yet heard about it, Nest is a beautifully designed thermostat that is armed with an array of sensors and also Wi-Fi enabled. It is “programmable” in the sense that you teach it, but it’s not like one of the usual thermostats that is impossible to understand or operate. While thermostats sound boring, actually they account for an awful lot of energy wastage.

According to the U.S. Department of Energy and Lawrence Berkeley National Lab approximately half the heating and cooling (HVAC) accounting for approximately half of the bill. The programmable thermostat, developed in the 1970s, promised to help people conserve energy, but 89 percent of owners rarely or never set a program (source: ACEEE, 2010). The devices are simply too complicated. In fact, Energy Star revoked its certification of all thermostats in 2009, according to Nest’s information sheet.

Nest addresses the programming problem through a combination of sensors, algorithms, machine learning, and cloud computing. Nest learns behaviors and preferences and adjusts the temperature up or down accordingly, making you comfortable when you’re home and saving energy while you’re away. Nest also provides people with tips and information to help them make energy-saving choices.

“It was unacceptable to me that the device that controls 10 percent of all energy consumed in the U.S. hadn’t kept up with advancements in technology and design,” says Tony Fadell.

So far, so normal. It’s a great product in an area that has really failed at any kind of innovation and a product that hopefully does what it says. Except, of course, that it’s not just a product. It’s a product-service system.

There are several layers of services in Nest. The first obvious one is that it’s an information and control system that’s managing your heating (or cooling) service. Warmth and coolness aren’t products, they’re environmental services that we are able to control and interact with. Most of the time we’re doing that with pretty blunt instruments, but Nest aims to change that.

Then there is the learning aspect of Nest. It’s smart enough, apparently, to know when the house is empty and turn itself down as well as learn the patterns of your behaviors. But it’s also able to influence your behavior with its leaf icon that shows you that you could save or be more environmentally friendly by turning it down a notch. 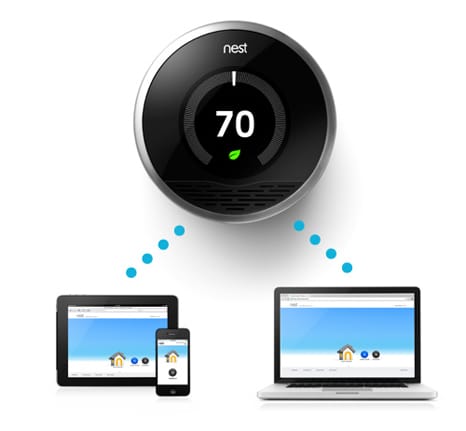 Nest is also Wi-Fi enabled, which means you can access, monitor and set it from a variety of devices via a Web interface. So not only do the designers have to design the product, but also consider how that Web interface is going to look and feel. Most of the other smart home interfaces I have ever seen look like an engineer’s readout on Windows 3.0. If the Nest concept is going to be successful in this regard, they need to be sure that this aspect of their service works.

Finally, you can buy a Nest from Best Buy, but you can also buy it directly from Nest themselves. So they’re offering a retail service, which also includes help working out the installation process along with useful videos and online support. The device also helps you install it and set it up. You can even order a Nest and have them come and install it for you. Again, a whole back-end of service management that must be taken into account as part of the design process.

If their website (compare that to other home heating manufacturers’ websites) and offering is anything to go by, Nest have this pretty well covered. But it just goes to show that even a single, seemingly small product, needs a well thought through service ecosystem for it to really work. Product designers don’t just design products anymore and they need to think of the product-service system they are entering into or creating, not just let others deal with it as an afterthought.