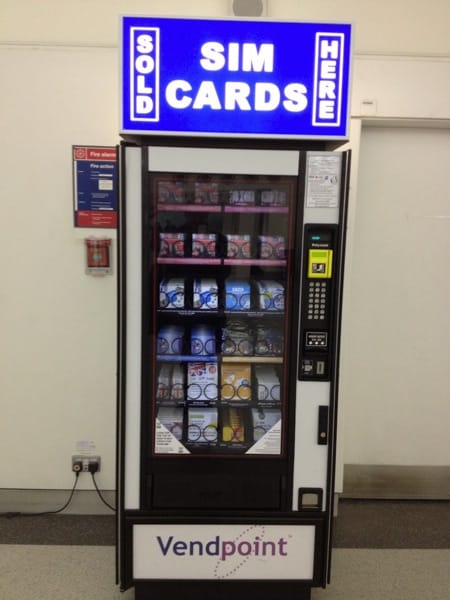 In Germany, mobile phone contracts are 24 months by default, not just for an iPhone. Additionally, there is a culture here whereby contracts are automatically renewed for a year (in some industries, two years) if you don’t quit the contract in writing, three months before the end of it. Of course, most people forget and hate their telco forever more. The telcos haven’t got their head around this yet.

Pre-pay accounts are, of course, a lot easier, but you usually have to provide some kind of ID. I saw this vending machine in Heathrow airport – the first time I’ve seen the possibility to just buy a SIM card without any human interaction and just start using it. The vending machine appeared to be provider neutral, with all the big networks represented. Interestingly, some of the SIMs were just data-only, which is a sign of the times for mobile telcos (VOIP killed roaming, so let’s sell them data instead).

It is also a reminder that SIM cards are really the only product that the mobile telcos sell. The handsets are sold by the manufacturers, subsidized by the telcos (who also get a cut, of course). Telephony is pure service.

What matters in life