Digital to Analogue with Paper.li and Newspaper Club 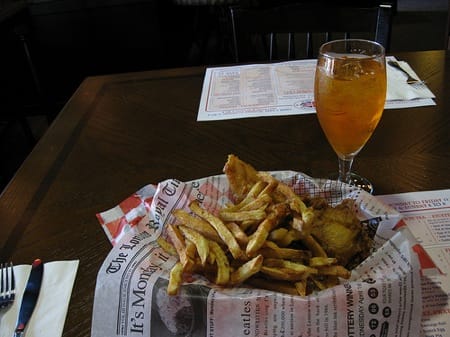 I’m working on a research project at the moment that is exploring the crossover of digital and analogue back-channels in offices and studios. We have an issue in our research department that the building is pretty unsparing and, worse, has a long corridor down the middle with offices off of it, like a hotel. The probably is exacerbated by having entrances at both ends. People who work down one end go in and out of that door as do the others at the other end. We also have a large part-time and distance workforce, so many people aren’t there at the same time. Even if you are there at the same time, the corridor problem means you might not see them.

Our situation isn’t unusual, but there is a digital backchannel via e-mail, Twitter and external and internal blogs that connect some of us up pretty well. At the same time, most of the interesting face-to-face connections happen informally. We don’t have a water cooler, but if we did, they would be water cooler conversations. You know the kind of thing, you walk into someone’s office and see an interesting book on their desk or some Post-It notes on the wall and start chatting about ideas.

I’ve been looking at services like Findings, which nicely collates and publishes your Kindle highlights as one way of dealing with the book example. Would we have a barcode scanner and a Delicious Library online somewhere to go the other way, for example? Perhaps something like Kooaba’s Shortcut is the way to go, given the ubiquity of smartphones.

The Near Future Laboratory’s post about making their own newspaper using Newspaper Club to print and deliver got me thinking. It still takes some manual effort to create the design and layout, of course, but perhaps it would be possible to semi-automate the digital ephemera generated via Twitter, RSS feeds, etc. and output it all as a PDF and upload it to Newspaper Club. Perhaps something like Paper.li would be the intermediary service, hooked into If This Then Than or Dropbox Automator to do the PDF processing. Might looks like a dog’s breakfast though.

I’ve turned off comments on this blog now, but if anyone has any thoughts on this please get in touch here or on Twitter.