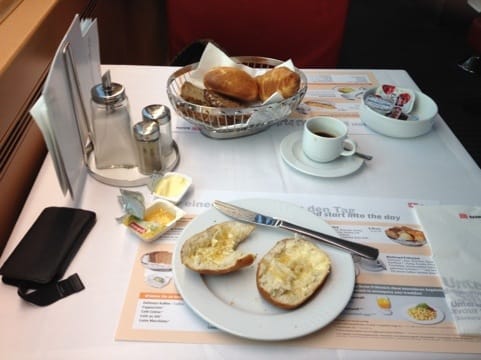 Breakfast on the German ICE train

While there are a few things not to like about German trains - officious staff, annoyingly slow ticket machines - it’s small beer (especially when compared to Germany’s beers).

This is the view of my breakfast on the Inter-City Express train to Switzerland that I have to take to work on many mornings. I normally grab something in Basel on the way and today was a luxury, although at 8.20 euros, including table service, it’s not much different to what I pay on-the-hoof in Switzerland. It made dragging myself out of bed at 5.40 AM more bearable.

Comfortable seats, proper tables setting, linen tablecloth, waitress. All remnants of a bygone age for trains in many other countries. This isn’t First Class either - there they bring you the food to your seat so you don’t have to even move your executive arse. It is the restaurant car for normal mortals.

The ICE trains in Germany are clean, quiet, punctual, well-equipped (each seat has a power outlet) and, well, relatively expensive too. My half-price ticket from Offenburg to Luzern and back is around 59 Euros (to give you an idea, that’s about 230km one way). But most commuters have a BahnCard, which gives 25, 50 or 100% off ticket prices and pays for itself pretty quickly. If you’ve paid for a BahnCard 100, it also has the effect of time-shifting the pain of payment. It’s like an all-you-can-eat buffet - you paid up front, so you take the train as much as you can instead of the car. On the other had, if I drive I pay about the same in fuel.

It should be obvious why all this matters. It makes train travel a pleasure rather than a hectic, sweaty, cramped horror, which is my memory of train travel in the UK. This matters not just for my personal comfort, but because it shifts behaviour. Taking the train is a far better and more pleasant alternative than driving. The car becomes second or third choice, not the default, which is just how it needs to be.