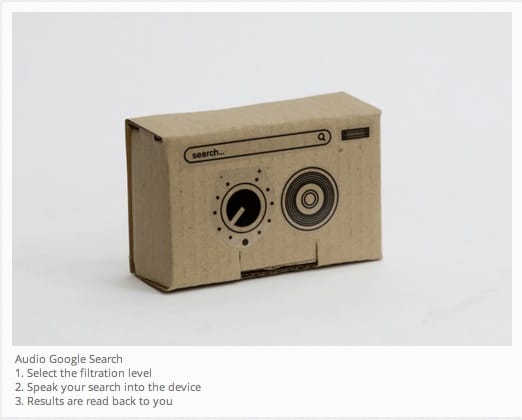 While perusing Nicolas Nova’s post on Prototyping session with post-its and cardboard at EPFL I followed his link to Stickers on Boxes, a “prototyping tool for generating objects that communicate concepts quickly & simply,” created by Anvil. Looks like a great approach.

The other day Nicolas and I were both bemoaning the fact that our students take far too long to get to the idea and concept stage, doing lots of “thinking about the project” and then “research” (which is mainly Google and a handful of books). As the deadline approaches, suddenly all the real work is done and, of course, by then it is too late to make improvements and iterations. By contrast, when I run short three or five-day workshops, the concepts get developed really quickly – more than in several weeks of “normal” project time – but then there is no more time to polish them. It is, as Ben Pieratt notes, a creative process roughly like this: 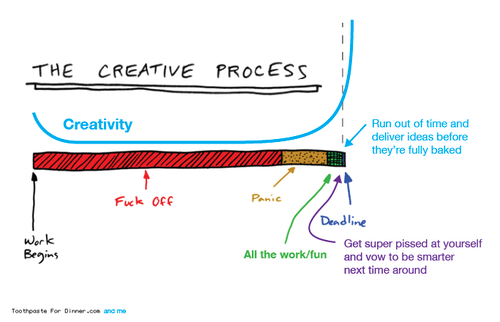 I think we teach the design process wrong. By “we” I mean most design courses I’ve encountered. By necessity of slicing and dicing the curriculum into modules and weeks, we tend to present the process as a linear one. Do some thematic research, focus down, do the user/field/literature/market research, ideate, develop a concept, sketch, prototype, polish, evaluate (rarely makes it into the project because time has already run out), bask in the glory of what a great designer you are.

A combination of the two would be ideal. Some structure (the double diamond, for example) is okay, but something more with an iterative spiral character that expresses the simultaneous ideation-concept-making process that really happens. More back and forth from extremes, more agile, I suppose. The inputs and activities should be taught in parallel, which means restructuring the curriculum significantly and ditching a lot of what are considered correct or useful evaluation processes. (Personally, I’d always favour feedback over grades. Grades are completely useless assessment tools).

Coming up with concepts and ideas is really easy. It shouldn’t take weeks or months. Implementing ideas with a high level of polish is really hard. The whole obsession with “innovation” has given people the impression it is the other way around, as if the doing were the easy bit, if only we had some ideas to do. This is horseshit, and I say that as someone with notebooks full of unmade great ideas. They seem like they’re great ideas because they’re still ideas. As soon as you start to make them, you find out if they’re full of holes or not. With interactive and service design projects and, increasingly, products and product-service ideas, you really need to feel what they’re like and there’s nothing like sketching out a storyboard, a blueprint or prototyping, even with simple sticky notes, to get a much better sense of the idea.

Marco on The Surface

Self-Ethnography and the Quantified Life