Self-Ethnography and the Quantified Life 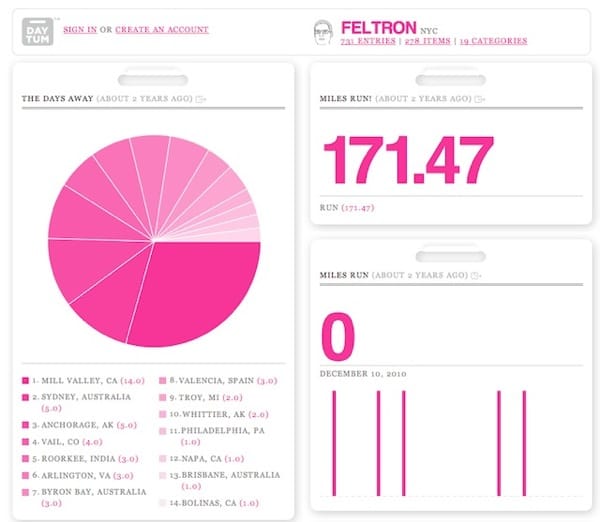 Marius Watz has put together a great compilation of “possible resources of interest in connection with the upcoming Self-Ethnography and Data Visualization module at AHO, focusing on tools and inspiration,” posted under Self-Ethnography at AHO, aka Big Data OCD.

The resources are based around the growing trend of documenting your own life, as described by Gary Wolf in Wired and also in his TED talk, The Quantified Self. Also popularised by Nick Felton’s Feltron Report.

I know Marius’s Code and Form blog from plundering his Processing code and teaching resources, which he so generously puts online. Naturally, a good section of the post is about tools and software to help document your life. Interesting to me is the obvious vein of “getting things done” and some kind of self-help aspect to many of these tools, giving rise to the obvious point that if you spent less time dicking around documenting your life, you might actually have one.

One I would add is Brett Terpstra’s Slogger, a project that is a set of scripts which “indexes various public social services and creates Day One journal entries or plain text Markdown files for them. It allows you to keep a personal journal that collects your online social life automatically, all in one place.” It’s a kind of lazy man’s self-ethnography, because it mainly harvests your social media output to automatically journal it. Brett is a master of such scripts.

I’m interested in this because of the collision of Big Data with personal data, which is in itself increasing in size. At some point we’ll all have databases on ourselves that exceed those of secret agencies and the whole system will have inverted, which is kind of an odd thought. We’ll also be dragging terabytes of data around with us on drives or in the cloud or in some data-centre on the Moon by the time we die. What are our grandchildren going to do with all that? In any case, it’s a great topic and I’m surprised none of my students are using it as the basis of an MA project (hint!).

I’m also interested in it because of a small research project I’ve been working on that looks at ways dispersed collaborators can encounter backchannel social and work information. By this I mean that most of the useful exchanges in a workplace are casual ones – the classic water-cooler conversations. In German they say “door frame” conversations, which I like because it describes the act of leaning on a doorframe as you poke your head into someone’s office and have a quick chat. We don’t have water-coolers here either. I regularly stop by colleague’s desks (yes, even when they’re not there) to see what books they’re reading and the kinds of conversations that arise from talking about these things are usually way more fruitful than scheduled meetings. But we also have a whole back-channel of digital water-cooler conversations through Twitter and blogs. The problem is that those not into those media miss out and those not in the office miss out on the physical water-cooler chats. The project looks and trying to bring those spaces together, mainly through using the building as a hub. So, people’s presence in their office is reflection physically in the space, but also tracked digitally. People’s “personal data” of Kindle highlights, tweets, etc. are also projected into the space. More on this project when we’ve actually finished the rough prototypes we only have time and budget for and I get a chance to write it up.

Guide to Camera Types for Interactive …