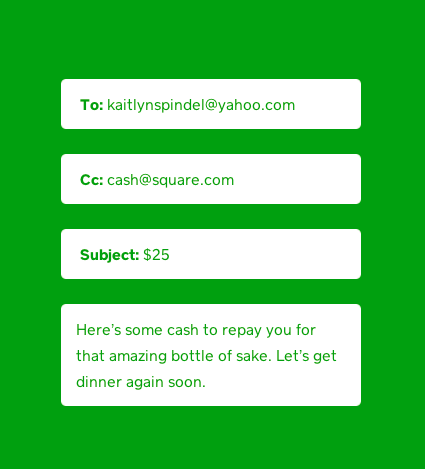 I’m fascinated by Square’s new service, Square Cash, that allows you to send someone cash simply by sending them an e-mail and cc’ing Square’s service. Walt Mossberg’s review of the service has been doing the rounds and has most of the details you need to know. Basically, Square doesn’t really act as a money middleman in the way that PayPal does, they act as a transaction messenger, instructing each bank to pay or receive the cash.

From a service design perspective I find this a really interesting example for a number of reasons. Firstly, it tackles a market that is poorly served. PayPal has legendarily poor and hostile customer service but has a near monopoly in the market of small transactions. Amazon and Google both have their competing services, but you need to have an account with these too. While Square does require to enter your banking information once (obviously, you need to receive the funds at some point), it’s not much of an effort. Plus—and this isn’t to be underestimated—Square seem to be pleasant people.

Secondly, the service attempts to remove as many of the barriers to usage as possible and piggybacks on a existing and familiar service and paradigm. Most of us are used to the idea of sending money or a cheque in the mail (well, you’re used to it in the USA—we’ve been doing electronic transfers for free in the rest of the world for ages) and e-mail is a near universal tool for anyone with access to a computer or a mobile phone, the latter of which gives Square Cash real potential to expand.

Finally, the story of the service is well explained, partly because of the two previous points and partly because Square have an appreciation for the power of communicating well. Square is Apple to PayPal’s Microsoft in the aesthetics department.

Square really, really need to expand beyond the USA and Canada if they really want to grow. PayPal is active worldwide and this first mover advantage means they can continue to offer a crappy service and hold people’s money hostage as they see fit. Financial regulations around the world differ enormously and this often prevents financial services expanding, but there is a real opportunity to de-clutter and simplify this industry. Banks should have done this years ago, but they are still struggling to make decent online banking websites, so we can probably forget about them.

The slightly puzzling part of this is how and why they are offering the service for free. I can see that Square can use it as a way to expand their market and try and break PayPal’s dominance, which only exists because everyone else uses PayPal, despite its awfulness. I can also see that their might be relatively minimal costs, as Square don’t actually process the transactions. On the other hand, it must cost them something and I would really like to see this take off and not suffer from them not being able to find a revenue model for it. I’m sure Square have thought about all of this, so it will be interesting to see how they continue.

May the force be with you – service design for …