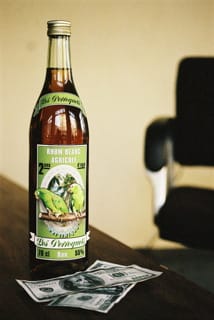 Slightly off topic for this blog, I know (well, okay, it’s about design and I live in Germany), but Deutsche-Welle have an entertaining story about the Schein Berlin agency in Berlin who create fake products for TV and film to avoid product placement issues.

This is real contrast for me compared to my experience with Australian TV, which seems to have programming content product-placed between branding and advertising. Most major sporting venues are also branded “Aussie Stadium”, “Telstra Stadium”, etc. and so are their sports teams. I imagine the U.S.A. is similar in this regard.

It must also keep those folk displaced by CGI visual effects employed in their model-making skills (a true art). But I felt a bit sorry for them when I read of their encounter with the fickle world of film:

Sometimes, they’re in for a shock, as was the case with “The Bourne Conspiracy.” The team built a complete Russian supermarket for the film, using hundreds of logos and labels, all of them invented.

“We spent half the night taping and stacking cartons, then we watched the film and were really disappointed at the way the camera simply rushed by,” Brehm said.