This week’s Doctor’s Note is all about value versus values. That extra ’s’ makes all the difference. Here’s the first part of it.

In a time when terrorists play death-games with hostages, as currencies careen amid rumours of a third World War, as embassies flame and storm troopers lace up their boots in many lands, we stare in horror at the headlines. The price of gold–that sensitive barometer of fear–breaks all records. Banks tremble. Inflation rages out of control. And the governments are reduced to paralysis or imbecility. 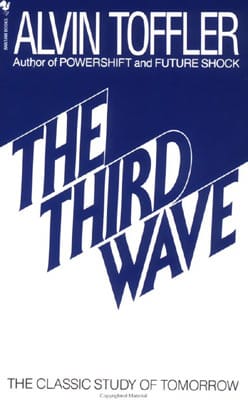 So wrote Alvin Toffler in the introduction of his 1984 book The Third Wave. I had a recent conversation about waves of development that sweep across the world unevenly and the friction they cause. It sent me off looking for the Toffler quote again, because I used it in the final chapter of my doctoral thesis, which I know you’re all dying to read. That quote seems to be perennially prescient.

The whole of The Third Wave is worth a re-read, because we’re now living in the future Toffler was imagining. He is quite often spot on and his metaphor of waves is a compelling.

The part about us living under the oceans was amiss, though, especially since “only less than 0.05% of the ocean floor has been mapped to that highest level of detail by sonar, which is an area roughly equivalent in size to Tasmania,” according to Jon Copley in Scientific American. (Amazingly, large sections of Mars are more accurately mapped).