Whilst writing that story about You Tube I spied BMW’s new “So No To Compromise” ad and website. It’s a US ad and is aimed at giving BMW a bit more “heart” apparently. 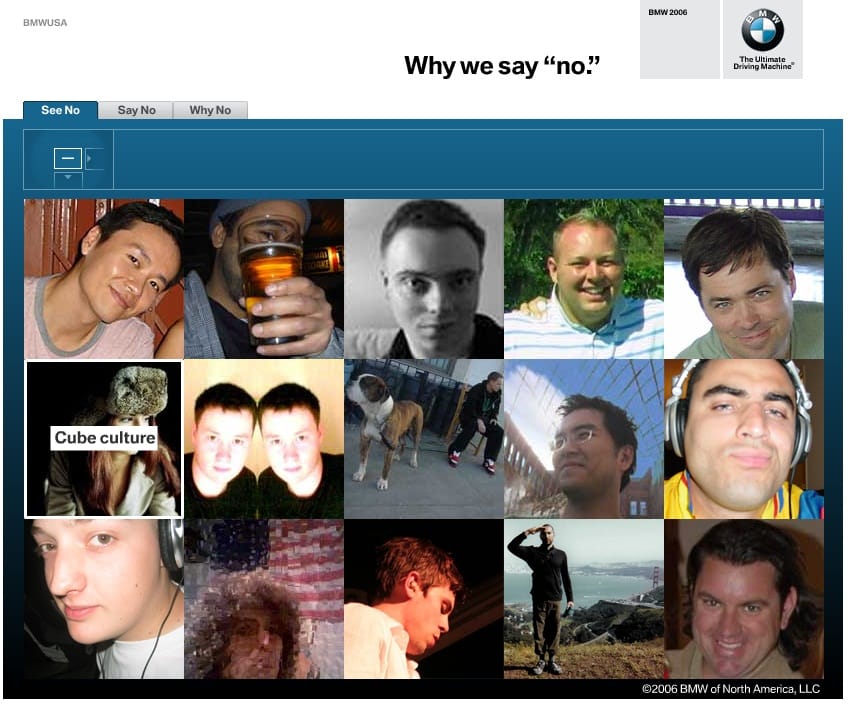 The site itself features the ability for you (yes you the web-surfing, blogging, public) to upload an image and tell the world what you say no to. It’s all a bit Flcikr-esque and not dissimilar to Jon Harris’s projects. Clearly they’re plugging into the whole social network, public content idea. But I wonder if this is really the best way to do it? Something akin to what real BMW drivers actually do might be more interesting. I’m suspicious that those aren’t ‘real’ people either.

Not sure about the compromise idea either, after all BMW, as with most German car manufacturers, have been given a panning for their declining build quality recently.

In any case, most designers I know don’t get paid enough to buy a top-of-the-line BMW (BMW are apparently wanting to appeal to the ‘creative class’ in the USA) although here in Germany, as you might expect, they are ten-a-penny.

One thing: I would like to just say “No!” to BMW drivers tailgating me at 200km/h on the autobahn flashing their lights as if that’s not fast enough. But usually giving them the finger does the trick.