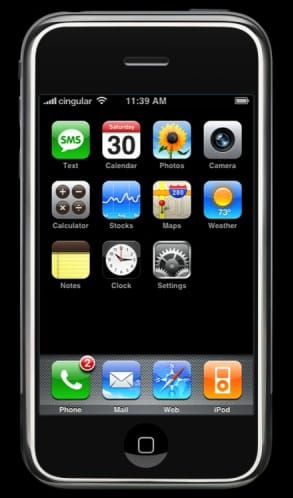 I’m going to join what will be an enormous club and blog about Apple’s iPhone. I nearly didn’t, just to not follow the crowd, but given my interest is in emerging technologies, interactivity and interface design I really need to.

So, well, it is amazing of course just as a great piece of product design and technology. It’s great to see a full-screen device that ditches buttons as well as many of the multi-touch interface ideas that Jeff Han has been working on for some time. I’ve been waiting to see these ideas in an everyday product.

Running OS X, with its attention to detail and multimodal ways of working, is also very positive. But the main thing is that it could completely change the landscape of mobiles.

Completely change the landscape?
Yes. When I was chatting the folks at Fjord about some of the work they’ve been doing in the mobile space (incidentally Fjord have just finished this project, Go, for Yahoo! ) I had a thought about the ridiculous range of mobiles, even from one company. Apple have been smart with the iPod in the way they have kept the concept roughly the same even as they make new versions. Nokia, for example, might be much better off not segmenting the market but rather creating a really decent range of maybe two or three phones and then just keep simplifying them. That’s the Apple model and that’s what they have done with the iPhone.

Additionally, the Wi-Fi, the most likely very easy Apple-style manner of setting up your connections will also get over the big bugbear of mobile devices - namely that they’re such an incredible pain in the arse to set up if you want to do any kind of decent network communication.

Some of the user-interface elements (like the multi-touch and drag and throw style interaction) might seem small, but those things have been huge and permanent hurdle to people using mobile services.

Lastly, it’s probably reasonably easy to make nice apps for the iPhone, especially given the widget-style interface. This opens it up to a great deal more innovative development than on current mobiles.

There are probably many more things to be added to this list and probably some downsides, but I’ll have to get hold of one first…

Regine comes to the Bauhaus