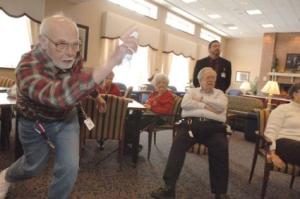 Following on from those thoughts about the Nintendo Wii, I noticed an Engadget re-blog of a Chicago Tribune story about folks in a retirement home getting into Wii Bowling. They’re having tournaments now in the home.

“People have no fear of picking up a remote control, but they’re hesitant to pick up a video game controller,” Llewelyn said [Beth Llewelyn, Nintendo’s senior director of corporate communications]. “So the idea was to make the controller look like a remote control with just a couple of buttons.”

One of the ‘old-timers’ said he used to “play a bit of Pacman” - sounds like a reformed addict.

So, although the graphics are apparently rubbish, it just goes to show that gameplay and interface can make all the difference.

(Image thieved from the Tribune article - and incidentally, this post’s title came from the image filename that someone there had wittily named it).