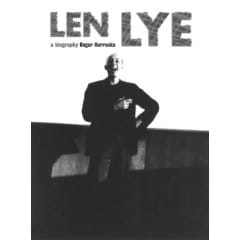 . Roger was one of the founders and former Head of the Department of Film, television and Media Studies at Auckland University and, more pertinently, was once Lye’s assistant.

Very kindly, Roger sent me a copy of his book, which looks like a great read from the first skim through (it arrived this morning). Lye produced an amazing breadth of work, always thinking of new ways to create. I particularly liked the quote on the dust jacket that “Lye was - in the words of poet Alistair Reid - ‘the least boring person who ever lived’". That’s not a bad epitaph.

Roger Horrocks and his wife, Shirley, also made a documentary about Lye called, Flip and Two Twisters, which you should be able to get from that link to their website or from the Govett-Brewster gallery.