There’s a great post on Data Visualization: Modern Approaches over at Smashing Magazine. 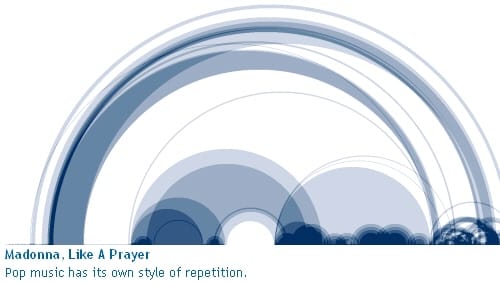 Some of them are pretty well-known, like Newsmap and (one of my favourites) We Feel Fine, but there are some newer and more unusual ones in there too as well as some good links in the comments.

There seems to me to be two distinct schools of thought about data visualisation - one is about taking a data set and then creating (usually) static images from them. This I find kind of interesting in that it often displays relationships that you wouldn’t see in a spreadsheet of numbers, etc. The data often seem to be used as the raw material for some kind of Processing-esque algorithm that spits out an image (like the Madonna track image from Shape of Song that I’ve used above).

The second, and in my opinion far more interesting, are data visualisations that are interactive in some way. Now, of course I’m going to say that, but I think there is a great deal to be said for being able to play around with the relationships in data and explore. I think it makes what can often be pretty, but pretty boring, interesting instead. It’s one of the reasons I like We Feel Fine so much - it’s a really playful interface with interaction design that relates to the content perfectly.

Musiclens and Diggstack are pretty nice too. Diggstack - a bit like We Feel Fine - I find fascinating for the ‘Internet in real-time’ aspect of it, rather like Twittervision or the more interesting (content-wise) Flickrvision.

What all of them demonstrate is that core principle of interaction design which is about plugging one thing into another and seeing what happens. It seems to me that everything else is built off of that foundation.

Creative Collaboration and the Future of Education …