Evolution of Dance vs. Titanic 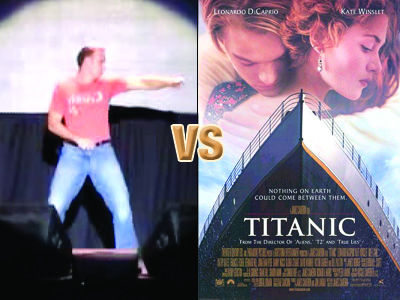 I’ve just been chatting with my online students in Australia about emerging media and it led me to do some quick sums on the merits of Titanic, the biggest grossing movie of all time, and Evolution of Dance, the most popular video on YouTube ever.

So, Judson Laipply’s frankly rubbish Evolution of Dance comes in at 58,381,789 views.The real figure is probably a lot more because people uploaded loads of duplicates (and still do) and also upload them to other video sharing services as well as ripping it and sending direct via e-mail.

Compare this to something like cinema and you start getting a picture of how powerful hyperdistribution can be.

(this post is quite long, so read on for more…)

So far, so good for cinema. Now lets look at how much both of them cost to make.

Of course it’s not that simple - worldwide Titanic took $1.8 billion in gross revenue and there’s also the merchandising, DVDs, etc. (I think that figure includes that if it’s listed as gross revenue - those stats are from WIkipedia).

On the other hand I’m sure Laipply has had plenty of spin-off action from his success (although he seems to be struggling to get the rights for the music he used in the video, which is preventing him from cashing in on it as much as he could).

That said, Laipply didn’t invest in anything much other than his rehearsal time and the cheap camera he recorded it with (if, indeed, he did the recording), some digitising time plus a bit of bandwidth to upload it.

If you were to make an independent film in Australia and get it shown in every cinema in Australia (which wouldn’t happen) for two months (which also wouldn’t happen) I would reckon you’d be lucky to get about 2 million people viewing it (Australia’s population is currently 20,434,176 - so that’s guessing that 10% of people would bother to go and see an independent film). In any case, I would imagine that would be considered amazing (and would never happen).

For comparison, Harry Potter and the Order of the Phoenix has taken AU$33,992,807 in Australia so far. Divide that by average ticket prices to get a rough viewing figure: Tickets were on average $10.37 in 2006, so even without adjusting them upwards for 2007 that’s a paltry 3,277,994 million views for Hazza and his magical mates.

Although it’s not an apples for apples comparison (as it’s Australia vs. worldwide) that would be well under the top 100 clips on YouTube. Position 100 is currently held by the brilliant Little Superstar at 6,989,901 views.

Incidentally, a cinema ticket in Australia requires 48.35 minutes of work to earn enough to buy it, on average, compared to only 16.11 minutes in India. (That was in 2003 - the stats haven’t been updated since then).

As is probably plainly evident I’m neither a statistician nor an economist and it’s also late.

Anyone care to take a look at my figures?

(UPDATE: First thoughts are of course that viewing figures aren’t the same as ticket/DVD sales, although in terms of the web the former is more important).

Google Moon faked in a holodeck