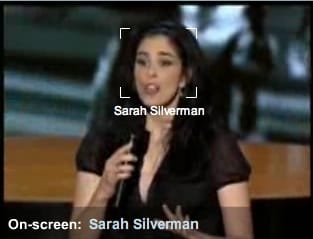 Interesting video search beta over at Reuters Labs that allows you to search for people in videos by just entering their name as a text query (obvious that part really eh?). The beta has scanned 609 hours so far for the test.

It’s powered by a technology by Viewdie that apparently does it in real-time. It’s not clear how the database is initially populated, presumably at some point someone has to at least import tagged images of celebs. There’s a slightly vague flow chart of how it works which amusingly ends with a big arrow pointing to $$$.

The interface is quite nice and simple though with the search results triggering video playback from the moment the person appears, showing a timecode list and other people in the same clip.

I imagine Reuters & Viewdie see big bucks in a database that news outlets can link to and scour (including people wanting to advertise based on video context). But it’s hard to imagine those in big government not wanting to try and use it to catch all those baddies out there.

What is education worth?

Podcast of Creative Collaboration and The Future …