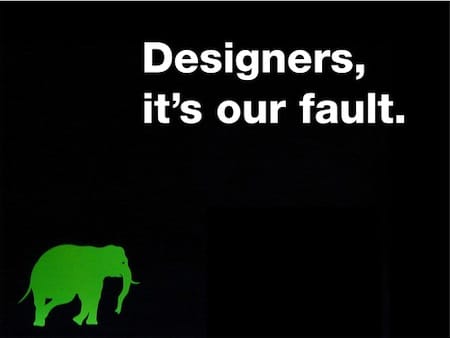 For several years I’ve been trying to express how design thinking can be used across a whole range of disciplines from sustainability to education to, well, design stuff. Service Designers like Live|Work do a great job of bringing much of these ideas under one discipline. It helps designers move up the chain of events in a project and have influence earlier on, when it’s really needed.

Designers aren’t just there to pretty stuff up. We can be used far better to solve problems. That’s what designing really is, especially in this whole interactive, interconnected, interweb world.

Thank goodness, then, for Ben Terrett’s brilliant talk that he’s put online called I’m a Designer, Use Me Better. It’s insightful, concise and funny in the way that things are funny when you know they hit on home truths.

Every designer, from every area, should read it.

Even more so anyone who is ever thinking of employing a designer should read it - I don’t agree with Ben that as designers climate change is our fault. We perhaps don’t voice our opinions often or early enough, but we also rarely get in front of the right people to voice those opinions to. Unless designers are used better and earlier in the process we’ll be at the mercy of corporate consultants pretending they know all about it.