Flash On the Beach Coda 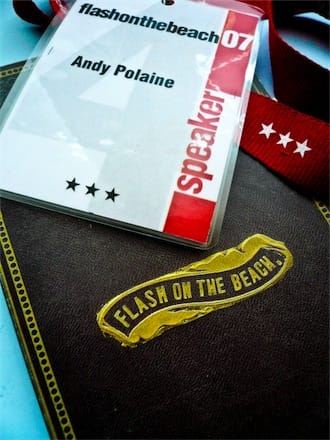 I just returned from a fantastic time speaking at Flash on the Beach ‘07. I’ve been to quite a few conferences over the years and this was by far the best I’ve ever been part of. John Davey really looked after everyone well and got together a brilliant line-up of speakers. My thanks to him and all the speakers for a great time.

I’m going to be writing a round-up piece for Creative Review, but briefly some of the highlights for me were Robert Hodgin’s incredible work using Processing, Brendan Dawes on how to break things and also Hillman Curtis and Neville Brody who both spoke much more about creative approaches than the tools.

For my part I gave a talk called Playful Revolutions, which took a look back over a whole load of work - a lot of it from the Antirom days (which was fun) - and looking at the importance of play in the creative and interactive process. It seemed to be a running theme in a lot of the talks actually. Flash has become a powerful and complex tool, but the danger with it is that it puts off people wanting to noodle about with it. I think it’s essential to break down those barriers so that more experimental work gets made because interactivity is still very young and there’s a lot left to discover.

The revolution in the title was also about how I’m seeing a lot of experiments and ideas that we played around with 14 years or ago or so coming round again. I think since flash has been able to manipulate bitmaps so much better coders and designers have broken free of the vector finally. In some respects its re-inventing the wheel, but it was clear that there is a whole younger generation of Flash people that don’t even remember tellTarget let alone Director and bitmaps - so it’s good to see this exploration. Either way, it just goes to show how much the tools influence the output.

I recorded almost all of the talks with my nice new Zoom H4 so the quality is pretty good. I also did a fireside chat with Brendan Dawes for a podcast.

UPDATE: I’ve been a bit slack on this because I’ve been so busy, but egotistically I’ve uploaded my presentation if you would like to hear it. You can download the MP3 of Playful Revolutions here or listen to it in the player below.