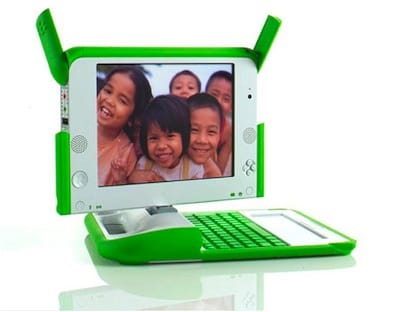 Alexander Stojanovic makes an interesting comparison between the Nintendo DS and the OLPC. Having bought both for his five year-old daughter at Christmas he has been able to compare:

The Nintendo DS (NDS) is the clear winner as an interactive device and learning platform. It truly is a paradigm shift for UI/UX. Our daughter was able to figure out how to configure two DSs for PictoChat (via WiFi) and now constantly wants to “IM” pictures and text with me. It’s an eye-openning experience.

The OLPC is the utter disappointment though. Everything about it is sluggish, unresponsive, cryptic and just sub-optimal.

Like Alexander and as someone who works in both interaction design and educational futures I really want the OLPC project to be a great idea, but I’m pretty worried it isn’t.

The first objection is that really the world would be a much better place if every child had enough to eat, was healthy and happy quite apart from having a laptop.

Finally, everything is in the execution. Nicholas Negroponte is keen to stress that the OLPC project is “an education project, not a laptop projectâ€ and that is, of course, highly laudable, but I’m worried that in the quest to make them so cheap, the user-experience might have been lost in the process.

Alexander Stojanovic’s post seems to be confirming these fears for me:

The OLPC delivers a very - how shall I put this - “academic” idea of what people (children) will want and like. The NDS was clearly tested and usability done on each aspect. The OLPC looks like all the decisions were hardcoded early on by a brain trust of “experts” without any thought of the actual experience of using, maintaining or enhancing the device.

Having created several interactive projects whose primary audience is children, I have experienced first-hand the need to test ideas on children. Looking through the “lens of the learner” is one of the first tenets of teaching and learning.

Engaging people is one of the first tenets of interaction design. Without that the rest doesn’t even get seen. Whilst I congratulate the OLPC team on their achievement I really hope they don’t forget those two principles.

Moving Between Consulting and Academia