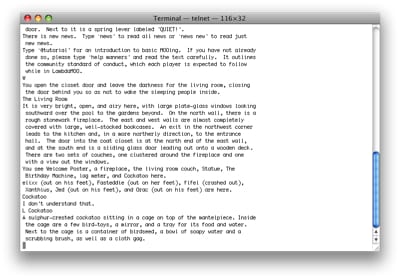 The development of technology is more like a spiral than the upwards arrow we often think of. The same ideas come around again and again with slight tweaks that usually push it in an upwards direction (though not always). Flash designers and developers are rediscovering the pixel fun that us Director folk were always used too and of course 8-bit arcade graphics made a big comeback on mobiles.

I was watching the general tweeting going on from those I follow on Twitter and have started noticing a lot of “goodnight everyone” kinds of tweets. That along with the @reply made me realise that Twitter is really just a giant MOO, just without the rooms.

Or is it really without the rooms? I think that the ‘rooms’ that people used to make in places like Lambda MOO are now personal blogs. When you ‘look’ at a person in Twitter, you go to their Twitter page and then usually onto their blog, much like you used to see a description of them in a MOO and then maybe visit their room/space.

Twitter is a bit more public and gives you the ability to follow people, but it’s amusing to see that people are still the most interesting content online just as it was in the earliest days of the internet.

The Future of Broadcasting and the BBC