The Network Generation is in The White House 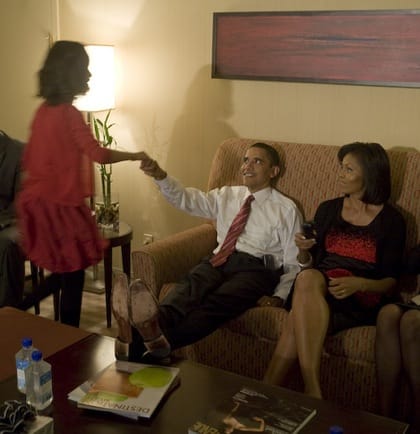 It is hard to overstate just how different these US elections were and what a shift in thinking Obama and his campaign signify. Is this the dawn of a fourth republic, whose cycles are “linked indirectly to stages of technological and economic development,” as Michael Lind argues? Or is this the rise of a kind of new informality or informalism, to bastardise a perfectly decent word into another -ism?

Just four years ago, at the time of the previous US election, the blogosphere consisted of around four million blogs, now it’s difficult to even count, but it’s possibly 133 million. In those four years we have, of course, seen blogging become and integral part of mainstream media culture. As The Guardian’s Jemima Kiss noted, this was a truly cross-platform election, with TV woefully slow to catch up with calling the election win for Obama compared to those online.

But what was impressive and very different about the Obama camp approach was how much they clearly get these new media forms.

Twitter’s election feed was - and still is - a torrent of posts and opinions, but during the voting we got to hear people’s accounts of waiting in line, the excitement the atmosphere. I’m not American, what should I care? And yet. And yet, it was hard not to be drawn into the sense of shared experience.

Obama has (or had - it’s been a bit quiet since the elections) a Twitter stream and being on Twitter during the vote was a shared experience. The Obama camp made great use of Twitter to push for support, to spread the message. The exit poll stats show just how much the 18-29 year old turnout had increased from 2000.

What is essential to remember here is that Twitter isn’t just a computer-based chat space, it is completely integrated into mobile devices too. That means Obama’s tweets, and those of his supporters, reached people on the way to or in the waiting lines of polling booths. It’s direct and intimate.

The world has become cynical of politicians who have long since appeared to ignore the protest and voices of the people who elected them. Whether Obama himself wrote his Twitter tweets we will probably never know, but the fact a presidential candidate is aware of it shows a much more direct connection with people - and not just US citizens. Even if there’s a lowly paid intern tweeting on his behalf, there is a sense that it might filter up. And, of course, there’s always the secret hope that Obama himself is doing the tweeting.

The Flickr photo set above show’s Obama with his family and aides watching the results of the election, watching McCain’s concession speech and being congratulated by his family. They’re intimate, often off-guard and in many he looks quite nervous as if he’s thinking “Oh God, now I actually have to be president”. It’s like looking at post-ceremony, pre-reception drunkenness photos of a freshly minted bride and groom.

The most striking thing about these pictures, though, is that they’re covered by a non-commercial Creative Commons licence. These photos (by David Katz) that picture editors all over the world would love to use to sell their papers remain out of their reach. But they remain usable by the millions of bloggers around the world.

The difference in approach is striking - these aren’t polished, selected, vetted images, tightly controlled by a PR office. They’re informal and out there for the world to see and use. It’s unthinkable that Bush - or any other major politician - would have done anything remotely similar on the “internets”. (The cynic in the back of my mind wonders if they maybe are vetted – there are no photos of Obama shotgunning a beer and flicking the Vs at McCain on TV, after all. But that doesn’t seem like his style.)

A day after the election, Obama’s campaign set up change.gov with, naturally, a blog. (Compare it to the stiffness of whitehouse.gov).

So, now we have a US President who blogs and twitters - or whose staff do at least - and appears to be open to opinions and voices from all over the world. In an age of increased surveillance and control, of clipped civil liberties, of an attempt by the previous generation to hang onto control at all costs, this different attitude and use of technology signifies a much bigger, generational shift. It is a shift to a mindset in which collaboration, conversation and the network mind are much more powerful than spin and top-down control ever can be.

It’s what anyone using Twitter, Facebook or writing a blog has known for some time, but now it’s as mainstream as it gets. The network has grown up. The network generation is in The White House.