Pattie Maes is a smart woman. She’s behind some research projects that I wish I had been part of. But the above presentation at TED of Pranav Mistry’s ‘Sixth Sense’ system gave me flashbacks to bad VR demos in the 90s and Steve Mann’s sad exploits as a cyborg. 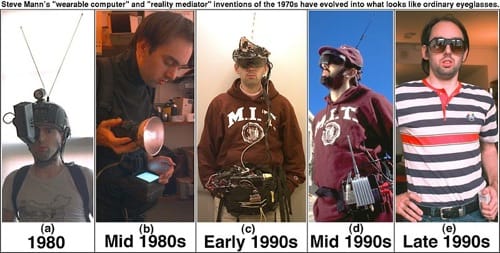 Sometimes the focus on technology for the sake of technology just gets in the way of thinking about how people actually live. Any mobile device I carry around will have a screen and a camera, whether it be an iPhone or a projection onto my retina. There are ample uses and opportunities for augmented reality with these, so why would I want to carry around a tiny projector too?

In the ‘Sixth Sense’ set-up, I would need to keep my body still to keep the projected image from moving all over the place and I need to have some kind of tracking blobs on my fingers too. Let’s assume the devices are combined. Again, why the projector when I already have a screen? So that I can wave my arms about as a gestural interface? In public?

Like VR, the central paradox of ‘augmenting the senses’ is that the technology cuts back the senses. We’re not just heads floating around without bodies, we interpret the world through our entire bodies. Anything that reminds you that you’re using a mediating technology gets in the way of those senses and what you’re trying to do.

The success of multitouch interfaces is that they make the interface invisible. It’s still there of course - someone has to set up the metaphors of ‘pinching’, etc. - but when it works well, you don’t think about it. But they have to work well too - the slightest lag or misinterpretation of a drag as a click soon becomes a frustration.

Clever(ish) as it is, Sixth Sense doesn’t make much sense. I get a bit sad when I see these kinds of demos get such a big response at TED, because it’s an audience who should know better and should be in front of the curve, not behind it. This should be especially true from Maes, whose MIT page quotes her as saying “We like to invent new disciplines or look at new problems, and invent bandwagons rather than jump on them.”

(And Pranav should spend some time working on his MIT Web page).