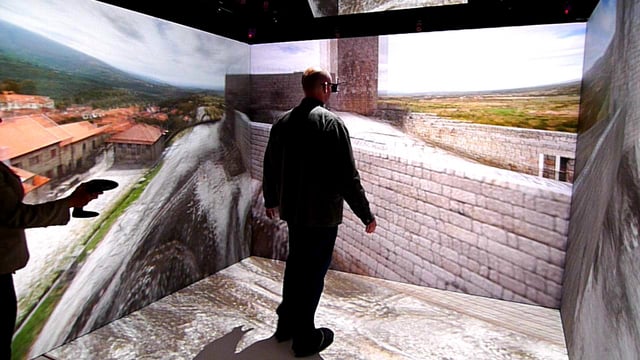 Regular readers will know I’m pretty cynical about VR and I’ve never been much of a fan of the CAVE system. The last time I used one at iCinema I was treated to an interface that looked like it was designed in 1989 and a headache from the glasses.

The above video is from IDEO’s trip to WATG’s labs, where they have an iCube set up. It’s pretty entertaining to see Dave lose his balance as he stands on the edges of virtual walls and it’s clearly working on a fairly immersive level in a way I have never experienced in any VR that I have tried. The reason, usually, is that the equipment and the environment are so imposing that you can’t really ever engage your willing suspension of disbelief and immerse yourself. That’s the irony of immersive VR systems.

I think part of the reason this is working well here is because WATG are hospitality architects, so they know a thing or two about making compelling environments and have some decent 3D chops. The landscape Dave is wandering around in looks at least as good as Unreal Tournament 2003 instead of Manic Miner.

It also helps that the headset is rather smaller these days, though the joystick device that the woman guiding him uses looks like a cordless power drill. It’s hard to tell what this would really be like when the novelty wears off.

I can see it’s use in terms of an architectural projects and, maybe, a product design, but I’m still wary that you would get much of a real feel for either of those things from the VR version. VR still feels like a technology waiting for a use rather than a useful technology. (Check out the beginning of this video where she’s standing lost and forlorn inside a Windows desktop - this would be my nightmare).

One last thing, I wish IDEO wouldn’t tag it “serious play” as if they need to justify using the word play. I know they use it to reference Tim Brown’s talk, but play is play and it’s a legitimate as anything else.