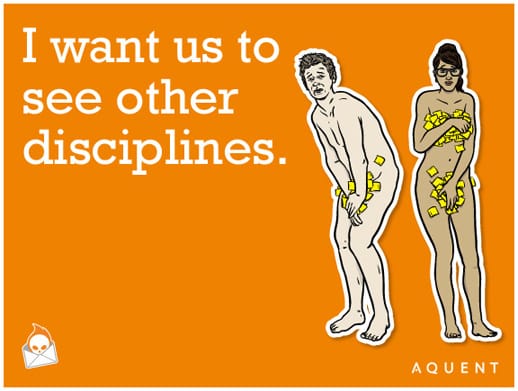 Interdisciplinarity and cross-disciplinarity have been buzzwords for the last few years, especially in education. I teach on the COFA Online Masters of Cross-Disciplinary Art & Design and in my main position at the Hochschule Luzern – Design & Kunst (HSLU), the phrase regularly enters discussions. The terms are used often interchangeably and often without really explaining what they mean. As so often is the case, the idea seems to be that by just talking about disciplines working together magic things will happen.

I prefer the term cross-disciplinarity because it suggests making connections rather than blending everything together into some kind of discipline trifle. One area that necessarily crosses many disciplines is service design, which I teach at HSLU. The fascinating thing for me about the service design approach is that it is about understanding connections and patterns rather than normalising.

Over the past year teaching service design has revealed three key insights to me. The first is that service design crosses over so many different areas and disciplines that teaching it is more about teaching a mindset and an approach than specific tools and techniques. The methods are still being invented and developed, which makes it an interesting voyage of discovering for my students and I.

The second insight is that it has made me realise how hard it is to teach people a certain way of thinking and seeing the world, especially at a Masters level when quite a lot of that mindset is already, well, set. Service design does involve doing, but the things we actually do are pretty simple technically. Sketching up or acting out prototypes, mapping out blueprints and journeys, even the ethnographic methods – probably the most skilled aspect of doing in SD – are not demanding in the way that, say, playing the piano is. The greater part of the service design process feels more like pre-production in film and involves a lot of thinking through complexity and zooming into individual stories and out again to the entire pattern and context. And, like film, it involves drawing in other skilled people to execute many of the ideas.

The third insight is that this was always the case. Teaching programming isn’t about teaching technical skills. If it were, then you would be better off learning to touch type, because the biggest craft skill of programming is typing. Except, of course, it isn’t. The best coders I know have a way of thinking about coding and often sketch it out before they even write a line of it and they can code in whatever languages fit the purpose – they’re not tied to one application or platform.

The way disciplines are often defined is by what people do, but really they have always defined by how people think.

I used to teach interactive media at COFA and head the School of Media Arts, which also meant heading the “Digital Media” program. The digital revolution collapsed the craft definitions of disciplines in many areas, especially in design and media. Calling a person or a piece of work “interdisciplinary” is as redundant as referring to it as “digital” (the course name always bothered me).

What people do does not necessarily define them in terms of disciplines. Actions might speak louder than words, but thinking leads to action. I can lay out type in Illustrator or InDesign with a reasonable degree of technical knowledge, but I know enough about graphic design to know that my typographic skills are pretty average and that the act of doing it doesn’t make me a typographer. I can take chisel to a chunk of wood, but that does not make me a carpenter.

There is a counter argument to this, which is the 10,000 hours rule – popularised by Malcolm Gladwell in Outliers – that it takes 10,000 hours to become the leading expert in whatever you are doing. Like Seth Godin, I only half agree with this concept.

While 10,000 hours might make you the best at something, it can also useful to be bad at something but at least be doing it. 10,000 hours means 10 x 1,000 hours not doing other things. Doing things the ‘wrong’ way can also lead to insights that other, trained practitioners have missed because the thought didn’t enter their head to do things differently that the way it has always been done.

When people talk about interdisciplinarity, they tend to focus on the artefacts of the craft skills. The classic examples are artists working with biochemists to create bio-art, architects and fine artists designing buildings, or designers and musicians working on artworks. In a lot of those cases, the interdisciplinarity seems to be more about mixing media than about mixing mindsets. Mixing mindsets is a lot harder because it involves, as Simon Penny argues, “deep professional humility”.

The problem is that professionalism is all about defining yourself as more skilled than those not in your profession. In academia, building and defending your professional castle is the name of the game, preferably while knocking down other people’s. We might talk the talk of interdisciplinarity, but as long as we still have departments and departmental budgets, program and course names that signal boundaries of inclusion and exclusion, interdisciplinarity remains just an abstract concept.

Arguably, the strength of service design is about understanding how all the parts fit together and concentrating on the glue in-between, because that is what everyone else ignores when they focus on their speciality. Expertise – whether 10,000 hours or half that – is useful, but so is spending some time in other disciplines in addition to your expertise.

I like Simon Penny’s term “deep professional humility,” because once you frame cross- or interdisciplinarity in that way, you realise that far from being defunct, we are light-years away from achieving it education. One of the things that attracted me to service design as a way of looking at the world – as a way of thinking – is that it requires that professional humility. It means accepting that you are a catalyst and facilitator more than an expert conferring knowledge or fixing problems. When you design with people instead of for people, it involves being open to what they bring to the table, understanding how their lives are put together and recognising that they are the experts of their own lives.

Almost all the tools and methods employed in service design, design thinking, innovation, etc. are really about achieving this humility. They are about deconstructing barriers between stakeholders, understanding people as people instead of their titles and roles, and trying to gather material that will help others see things with fresh eyes in order to create sustainable change and innovation, such as presenting customer insights or stories to a client or mapping out the complexity of an organisation via blueprints.

In the end, it is all about saying, “You currently see things this way, which is may be creating problems or blinding you to opportunities, how about seeing it from this angle?” Co-creation helps people shift towards a professional humility because they are all in it together (ideally). Liz Danzico’s various writings on design and improvisation really highlight this well (see her present on it at Interaction 10).

Let’s stop using the term interdisciplinarity as a magic buzzword and actually tackle what it means to mix mindsets, to work across disciplines. On an institutional and organisational level this also means dismantling the structures that encourage professional conceit instead of humility. Instead of focusing on racking up 10,000 hours, spend a few hundred hours being bad at something. It is a good way to understand other people, appreciate their skills and the way they view the world and it is a good reminder of what it feels like to learn something new. A mindset can be changed in the space of time of a short conversation if you are open to it.

(Thanks Liz for feedback on this piece).