A couple of weeks ago I wrote a post about the new Swiss crowd-funding platform, wemakeit.ch. In the post I suggested that this is a big opportunity for graduating students looking to strike out on their own rather than having to find investors for their idea. I still believe this to be true, but Don Lehman wrote two excellent posts over at Core77 discussing the pros and cons of crowdfunding.

Don launched a successful Kickstarter project for his Stylus Caps – caps that turn your favorite pen (Sharpie, Bic, Pilot) into a touchscreen stylus. In his posts on Core77 he shares his experience:

As I was literally knee-deep in boxes of Stylus Caps that were to be shipped to 1,796 Backers who helped me do something I never would have been able to do on my own. All I could think was, “People need to know what it’s like to do this.” There were a ton of surprises along the way that were unique to running a crowdfunded project that I had no prep for. To say that I would do things differently the second time around, would be an understatement.

The crazy thing is, every project creator is unnecessarily blazing their own trail. That’s because there hasn’t been much open talk about what its like to run one of these projects. Why or why not, you might want to crowdfund, how to prepare to launch your idea, how to communicate with potentially thousands of people who have pre-ordered your idea, how to run the project on a day-to-day basis, how to deal with shipping.

The second “Should I Do This?” post takes a sober look at what it takes to get a design idea actually made and shipped. Having the idea and sketching out the concepts and making a 3D rendering are the easy part. As always, ideas are easy, getting things made and shipped is the hard part. Crowdfunding lets you sell before you’ve even done the hard part, says Don: 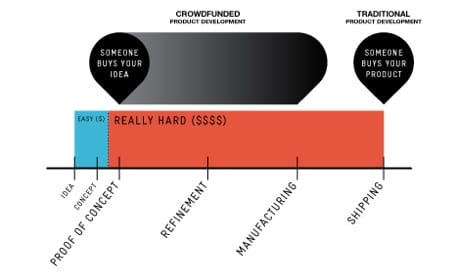 The scary part is that instead of having one investor holding all the cards (probably not good for your morale), you have many people invested in your project and they’re all talking about it online.

The public aspect of crowdfunding development means that you need to keep your Backers in the loop of your progress. This can be alternately amazing and incredibly stressful. You’re not only dealing with the ups and downs of getting something made, but you have a large group of people invested in your success, watching and critiquing your progress in real time. Basically it turns the design process into real time performance art. Most will be fully supportive of you, but an extreme minority will be highly critical of every misstep (SPOILER ALERT: You will have missteps.) in a very public way. To put it more succinctly, its the absolute best parts of the Internet, mixed with a dash of the absolute worst parts of the Internet.

Nevertheless, Don and many others’ experiences of crowd funding suggest that it really is a great way to go, especially with a small to medium size idea that you know how to get manufactured. One key word of advice from Don is to really have had some experience taking a product all the way from design to launch. So, those of you also studying design with design management, for example, may be well placed to try out your chops.

Most of all, though, as Don suggests, this is uncharted territory. Even if you’ve done a crowd funding project before, as more people become aware of what it is and how it works, things are going to change and we need to capture the experience:

We need to build on what has been learned. Crowdfunding is still in its infancy and too important to the future of design for us to not be talking about it. So here is my mission: Describe what it’s like to run a product design project in 2012, the early, wild west days of Crowdfunding.