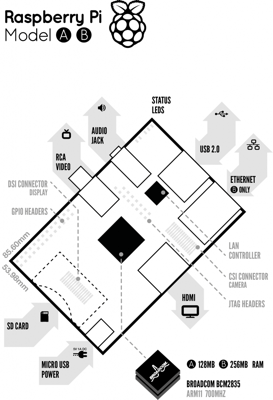 Raspberry Pi, if you haven’t already heard, is an ARM GNU/Linux box for $25. It is a roughly credit-card sized computer that plugs into your TV and a keyboard. Model A 256Mb RAM, one USB port and no Ethernet (network connection). Model B has 256Mb RAM, 2 USB port and an Ethernet port (costs $35). You can boot from SD cards and even hook a hard-drive up to it to take over after the initial boot. Seneca College have put together a “remix” of Fedora to work on the Pi.

The makers of it basically want to put it in the hands of every schoolchild so that they can learn to program and not just use computers and devices. It’s founder talking on Radio 4 the other day said, “If you ask kids to code, they think it’s boring, but if you ask them to build their own “app”, they get really excited.” I’m paraphrasing, but it’s interesting what language can do.

Reminds me of the Sinclair ZX80 days. I seem to be having a bit of a retro computing week.

The Psychologist’s View of UX Design

Digital to Analogue with Paper.li and Newspaper …