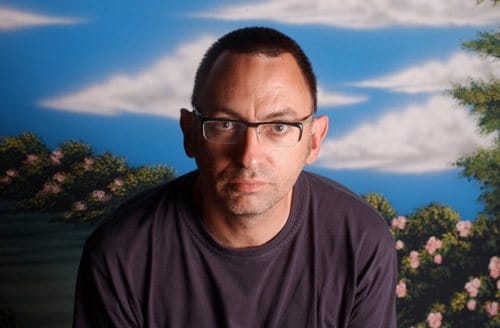 This morning I received the shocking and very saddening news that my ex-lecturer and colleague, friend and mentor, Andy Cameron died yesterday (May 28th) of a heart attack. Yet another great loss to the interactive media world.

Finding words is not usually something I struggle with, but today they are stuck in my throat. Andy quite simply changed the course of my life.

When I was a first year BA student, intending to become a film director, Andy was my “digital media” lecturer. He introduced us to Photoshop 2 and Macromind Director 3 and ways of thinking about this new thing called “interactivity”. It was with Andy that I wandered into the college’s VAX computer lab and got my first e-mail address, back in 1991, and where he first showed me “The Web” in line-mode text as it was back then and, later, Ted Nelson’s and Hypertext. Film directing went in the can as I saw the future potential of interactive media.

But it was Andy’s playful curiosity and enthusiasm that made the real difference. He encouraged us to explore and mess around with these new forms and technologies. He would gleefully tell us that we “should go and try” something, not really knowing if it were possible, but knowing that we would probably work it out. We did and we learned a great deal in the process. He would then feign his dismay at being out-done by his students – an experience I later had as a lecturer myself. He had a powerful intellect that placed these emerging media forms into context and was quick to call-out post-structuralist bullshitters – of which there were and still are many in the new media arts scene – and could do so due to his great knowledge of the material. His charming, slightly chaotic manner was a deceptive ruse. Underneath he was as sharp as a tack – just read some of his writing.

His greatest impact on me, though, was that he had the humility to let his students become collaborators and co-discovers. He saw the potential in the group of us who were playing with this new medium, going around to each others’ houses (including his) and showing off and swapping the little interactive “toys” we made. He encouraged us to take our playful exploration seriously, but managed to do so without sucking the life out of it. It was he who encouraged us to apply for an Arts Council grant and to set up shop as a collective studio. Andy was a pioneer, but shared his knowledge freely with us and encouraged us to come along for the ride. Without him, that group of us would never have eventually become Antirom and spawned the various careers and agencies with their roots in those early days and his intellectual generosity. We owe him a great deal.

Andy was a mentor for me for many years and shaped me intellectually and professionally more than anyone in my life, even after Antirom disbanded and I went on to have a similar hybrid commercial and academic career myself. His intellectual DNA is all over my PhD on playfulness and interactivity, which arose out of a conversation about trying to define the language of interactivity. I will always have fond memories of late nights at his place coding, designing and jabbering on about interactivity, of staying with him in Italy during a heatwave and his attempts to argue in poor Italian with the air conditioning engineers, and of those extraordinary formative years together at Antirom.

The other day I found a photo (a real, physical one) of Andy taken in the Antirom studios. I realised he was about the same age then as I am now and I realised just how much he gave me. Now I know just what a loss it is that he is gone.

My thoughts and sympathy go out to Emily and the boys.

(Creative Review has a nice tribute and comments about Andy).

Why the big type?