Service Design, The Force and Yoda 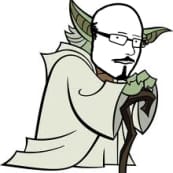 While I am down under in Melbourne later in August for UX Australia I’m going to be giving a different talk and hosting a discussion at RMIT’s DESIS Lab in the RMIT Design Hub for Service Design Melbourne.

Yoda sums it up well in his description of The Force in The Empire Strikes Back:

“Life creates it, makes it grow. Its energy surrounds us and binds us. Luminous beings are we, not this crude matter. You must feel the Force around you; here, between you, me, the tree, the rock, everywhere, yes. Even between the land and the ship.”

The point is, of course, that Luke is so focused on his ambitions and getting his ship out of the swamp that he’s unable to feel the Force between the ship and the land, so he can’t get the ship out of the swamp. Organisations create organisational charts and process diagrams often representing time, context, and connections with innocuous arrows and lines. The focus is on the boxes – who is responsible for what – but the connections are essential to the experiences people have with those organisations, within and without. The problem is that, like Luke with The Force, the arrows and connecting lines are so ubiquitous in diagrams that they seem invisible and are often overlooked.

If you are down that way, do come along. Here are the details: