That extra ’s’ makes all the difference.

Whilst we are talking about the dysfunctional desire to reduce the world to bottom-line numbers, there was a remarkable article in HBR about the backlash to BlackRock CEO Larry Fink’s suggestion that he would change their hiring and compensation structure to advance diversity. It will surprise no one that the backlash came from Fox Business.

Here’s a quote from the HBR article:

The Fox article went on to quote Charles Elson, a corporate governance expert at the University of Delaware, saying: “This is fundamentally not the role of a public company, and it’s unfair to investors who may not agree with his politics. A CEO shouldn’t use house money to further a goal that may not create economic returns.”

I couldn’t disagree more. Business leaders must finally, once and for all, let go of the outdated and erroneous notion that social factors — and not just diversity — are irrelevant to the economic success of our companies.

Value is so often pitted against values as if the two are oppositional forces that may never be reconciled, much like the economy versus the environment. But, of course, economies live inside the environment and businesses operate inside societies that have values as well as the environment. The view that “legally, their primary responsibility is to enhance shareholder value, not to make the world a better place,” (Fox Business, again) makes neither ethical nor economic sense. The evidence for The Ethics Economy is compelling and already here.

When you’re inside a bubble, it’s very hard to see outside of it, which is what exacerbates structural inequality and why Larry Fink’s approach is so exemplary. The same goes for the obsession with GDP from economists or, rather, the obsession with economics.

Recently, the World Economic Forum posted one its short video interviews with Minouche Shafik, Director of The London School of Economics and Political Science (LSE) on the three things that make people happy. Not surprisingly, none of them is GDP, but rather good health, good relationships and meaningful work (as opposed to bullshit jobs).

Economics has a dismal record. It failed to predict the global financial crisis and the few who did faced ridicule at the time—a classic bubble phenomenon. The financial sector is, of course, stuffed full of economists, but that hasn’t prevented immoral, irresponsible and illegal behaviour.

Health and well-being, happiness and life’s meaning are already well-understood and measured by sociologists and anthropologists. Listen to them instead. Otherwise it’s like suggesting that this “money thing” seems quite important, so physicians should start prescribing it.

If that all makes you feel depressed, I can recommend two books for you, one long-finished and that I quote all the time, the other I have just started. 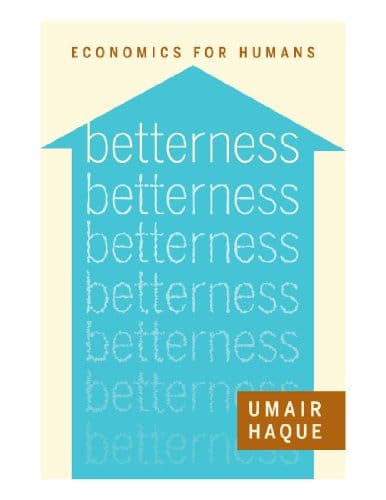 The first is Betterness: Economics for Humans by one of my favourite authors on the intersection of economics and society, Umair Haque, (he also has a fascinating life story). I could quote the whole book—and there’s plenty to read by Umair online—but regarding Fox Business argument, here is a useful response to bear in mind. It’s a quote from an interview with Joshua Daniel Margolis who co-wrote the book People and Profits?: The Search for A Link Between A Company’s Social and Financial Performance with with James P. Walsh.

“There have been 80 academic studies in the last 30 years attempting to document the relationship between social enterprise activities and corporate financial performance. The majority of results (53%) point to a positive relationship, and only 5% of studies indicate a negative impact on the bottom line”

Betterness is indeed good business. Here is Umair in emphatic mode, but the book is full of well-researched citations and solutions:

Call me a heretic, fire up the stake, ready the kindling, but I’d suggest that today we stand on the vertiginous cusp of an equally dizzying transformation in our understanding of prosperity’s place in the human universe: that an economy isn’t an end in itself, but that it’s a means to the end of a good life. That life isn’t a means to the end of wealth, but that wealth is a means to the end of a good life. That a good life is composed more of what you can’t buy than what you can. That a good life isn’t built first on disposable stuff that matters in economic terms, but on an economy that matters in human terms. That a healthy economy isn’t just one that’s less dysfunctional, but one capable of scaling higher and higher peaks of optimal function. That lives lived meaningfully well place real wealth above shareholder value, people above product, outcomes above income, and are a consequence of striving for better—instead of just “busier.” 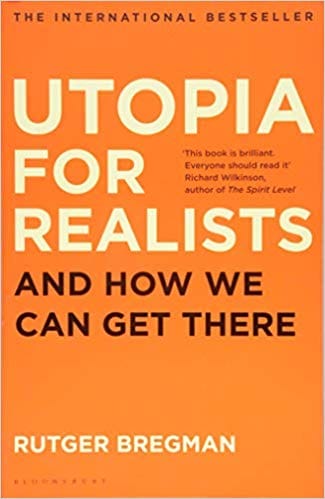 The second book, that I knew of but the author’s recent viral appearance tipped me into finally reading, is Utopia for Realists by Rutger Bregman. Bregman is most recently famous for suggesting to those poor souls at Davos, who flew in on one of 1,500 private jets, that the rich paying their fair share of taxes would be more useful than philanthropy.

Winners Take All author Anand Giridharadas published a conversation with Rutger Bregman and Winnie Byanyima (who also spoke out on the same Davos panel) yesterday. Giridharadas closes with this:

But there are cycles in history, and I believe we are at the natural end of a 40-year cycle, defined by the religion of money, defined by the veneration of entrepreneurs and markets. And instead of just saying, “That’s wrong”, I think it’s more empathetic to ourselves as a society to say that the last 40 years has been an experiment, an era defined by entrepreneurs as heroes, markets as gods – just as a century ago there was the industrial revolution and the first gilded age, a time of great fortunes. I think we are living in the death pangs of an era that has done tremendous good, but has also done tremendous harm, that has lifted a lot of people out of poverty, but also put the planet in mortal jeopardy. And I feel hope that another era has to follow this era because that is how history works. As well as the death pangs, there are birth pangs right now. I believe that after the age of markets will come the age of reform and the age of solidarity.

In Alvin Toffler’s language of The Third Wave, the current frictions and tensions are the turbulent riptide as the the wave of market veneration recedes and as the age of betterness1 rolls in. My generation may be around just long enough to experience our children beating us with sticks for not doing more about it at the time.

This post was originally part of this week’s Doctor’s Note, my newsletter containing a mix of longer form essays and short musing on design, innovation, culture, technology and society. Sign up to get it first (and in one piece).