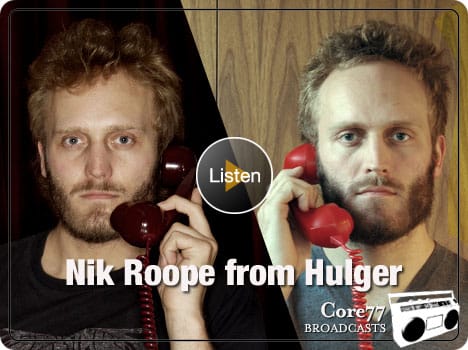 My first Core77 Broadcast with Nik Roope about Hulger has just gone online.

It should become one of a series of podcasts for Core77 and I’m really pleased because it’s one of my regular reads. Core77 started out (and still bills itself) as the “industrial design supersite”, though their remit has become somewhat wider, which I think is great personally.

So I thought I’d start with Hulger because it is product design, but with a very different philosophy to most gadgets.

I’ve known Nik for around 15 years. We were both members of Antirom and also used to do an interactive performance together with Joe Stephenson. Over the years we have had some really interesting conversations about emerging technologies and cultures and I’ve watched Hulger go from an amusing idea to being on its way towards being a design icon.

The interview also brings this philosophy to bear on his main job as one of the co-founders and creative directors of digital agency, Poke and it’s interesting to hear about how those two sides influence each other.

You can listen to the broadcast on the Core77 site and there is also a version on iTunes.

Let me know what you think and also who you would like to hear interviewed in the future.